This article contains songs hosted on Youtube or other video-sharing sites. Should a link be broken or a song unavailable, please leave a comment for the creator to see. 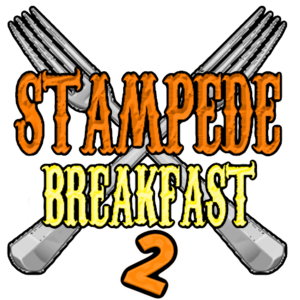 Stampede Breakfast 2 is an umbrella game for the Nintendo Switch, developed by Crash Co. It serves as a direct sequel to Stampede Breakfast, and has similar gameplay aspects. As such, gameplay is mostly similar to the Super Smash Bros. series with some differences. To compensate however, the game has more of a story focus.

Much like its predocessor, Stampede Breakfast 2 is very similar to the Super Smash Bros. series in terms of gameplay. Unlike traditional fighters like Street Fighter or Mortal Kombat, the game does not use health bars to gauge damage. Instead, damage is indicated by how red the player's character icon gets. The more damage a character receives, the redder the icon will get, which causes players to be launched farther. Should the player be launched too far by an attack, they will be KO'd.

Atthough the combo attacks from Stampede Breakfast are not retained, a new feature is introduced that serves as a replacement for Final Smashes in the Super Smash Bros. series in the form of a meter. As the player delivers and takes damage, the meter will begin to fill. Once the meter is full, players are able to use one of their omega attacks. Every character has three different omega attacks; a side, upward, and downward omega attack. These are significantly stronger than the character's other attacks.

Rise of the Dark Forces is the game's story mode, inspired from Adventure Mode in Super Smash Bros. Melee and Story Mode: EVOLVE from Kingdoms of Fighters. In this mode, the player will select a team of three characters to play as throughout the mode as they play through six stages, culminating into a final battle against Empress Xzal.

Rise of the Dark Forces opens with a cutscene with Empress Xzal on her battleship, floating through space. On her monitor, screenshots of various locations such as Yoshi's Island, Ponyville, Alola, Mobius, and the Mushroom Kingdom, laughing to herself. She pushes a button on her chair, firing a large ball of energy from her battleship. It goes a short distance forward before exploding and creating a black hold. Though Xzal's battleship is unaffected by this, several galaxies end up getting pulled into the vortex, these galaxies being based on the various universes represented by the game. These all collide into one, large galaxy. Viewing this from her screen, Xzal laughs, flying towards the new galaxy to take it over.

In this new mixed galaxy, all of the residents are in panic. Some have tried to figure out what caused the situation, while others are going around, seeing this as an opportunity to take over. The rest of the game's plot is dictated by the characters selected. Depending on who the player selects for their three-character team, the way the characters meet, treat the situation, and defeat Empress Xzal will change. The stages and areas visited throughout the mode will also be different.

Regardless of which characters are selected, the adventure culminates into a final battle against Empress Xzal. Though she puts up a fight, she is eventually defeated, and her goals of conquest are put to an end. Her battleship crashes into the ground, and the team manage to survive. Then, another cutscene plays, detailing the what the player's characters do afterwards. In several endings, it is hinted that residents of the new, merged galaxy have learned to live together in harmony.

Stampede is the game's free-play mode. Players can pick their characters, stages, and settings to have a match. It can be played with multiple players or with a single player against AI opponents. It also serves as a combination of the Smash and Special Smash modes of the Super Smash Bros. series, as options like giant, where all the characters are giant, and slow, where all the characters are twice as slow, are additionally available in this mode, and items are turned on by default.

Another notable feature is a customizable physics engine; using the sliders, players are able to set the speed of the game, the floatiness of each character, and more. Players are also able to activate and deactivate techniques such as Footstool Jumping, Wavedashing, and omega attacks. Even basic techniques like shielding and dodging can be turned off.

Boss Battle is a variation of Stampede. Like Stampede, players can pick their characters and play on a stage, as well as set features and toggle techniques on or off. However, one player will control a large boss that will wreck havoc on the stage. The boss cannot be defeated by the other players, as the boss is simply there to make matches more intense and wild, but attacking it will stun it.

Arcade serves as the main solo mode of the game. As the name suggests, the mode takes inspiration from similar arcade modes in games like Street Fighter and Mortal Kombat. After picking a character, players are able to select a difficulty (Very Easy - Easy - Medium - Hard - Very Hard - Nothing Harder) and a number of stock lives to have for the whole mode (1 - 5).

Throughout the mode, the player will battle nine randomly-selected opponents in a one-on-one battle, culminating into a final battle against a dark, shadowy clone of the player's character. In between battles, sometimes the "Danger Roulette" can appear. This will pick an option randomly that will affect the match. This can be a handicap against the player, an advantage to the opponent, even both on higher difficulties.

Quest is very similar to Classic Mode in Super Smash Bros. for Nintendo 3DS. After picking a character, players are able to select a difficulty (Very Easy - Easy - Medium - Hard - Very Hard - Nothing Harder) and a number of stock lives to have for the whole mode (1 - 5).

The mode takes place on a world map of sorts, where the player can pick a path to select which opponent to defeat. After every match there are three branching pathaways; a green one, a blue one, and a red one. Taking the green path will give the player an easier challenge, while the red path will provide a harder challenge, albeit with more rewards. Meanwhile, the blue path serves as a middle road. Sometimes, a black path can appear as well, which is even more challenging than the red path but grants more rewards, and is especially common on higher difficulties. After several battles, the player will eventually find a treasure chest and be given a different reward based on the difficult of the paths taken, with more red and black paths taken granting a higher reward.

Bowser's Castle Mode is based off of The Great Maze from the Subspace Emissary in Super Smash Bros. Brawl, as well as Smash Run in Super Smash Bros. for Nintendo 3DS. After picking a character, players are able to select a difficulty (Very Easy - Easy - Medium - Hard - Very Hard - Nothing Harder) and a number of stock lives to have for the whole mode (1 - 5).

The mode starts with Bowser standing on top of his castle with a large Power Star at hand. The player's character will then enter his castle. From here, the player must move around the castle, defeating any enemies they see. Throughout the castle are red doors, which the player must enter. These doors will take them to the Bowser's Castle stage where they will battle a shadowy clone of a random character. By defeating a character, the player will unhinge a lock on the large door at the center of the castle. All of the characters must be defeated to gain access to the final room, where the player will battle Bowser (or Blue Bowser if the player is using Bowser) in a final battle. Depending on the difficulty, there can be between 10 and 50 doors. Throughout the mode, Bowser will also push a button to cause a random effect, such as spawning more enemies or weakening the player, which becomes more common on higher difficulties. Once Bowser or Blue Bowser is defeated, the player will get the Power Star and fly away as the castle crumbles. The rewards the players receive depend on both difficulty and how many enemies the player defeated.

Spring Breeze Mode is, as its name implies, based off of the Spring Breeze sub-game in Kirby Super Star and Kirby Super Star Ultra. After picking a character, players are able to select a difficulty (Very Easy - Easy - Medium - Hard - Very Hard - Nothing Harder) and a number of stock lives to have for the whole mode (1 - 5).

Spring Breeze Mode is structured exactly like Spring Breeze in the aforementioned games. The player will traverse through four stages; Green Greens, Float Islands, Bubbly Clouds, and Mt. Dedede. The stages are identical in layout and progression; the player must reach from one end of the level to the other, all while defeating enemies in the way. At the end of each level is a boss battle, in which its defeat will allow access to the next level. The final level, Mt. Dedede, is simply a battle against King Dedede. Once he is defeated, the player will go to King Dedede's treasure vault and get an award. However though, the brightness and happiness of the levels will decrease as the difficulty progresses, and the bosses will become stronger. Notably, Nothing Harder has the mode resemble the Revenge of the King sub-game from Kirby Super Star Ultra.

These characters are available from the start of the game.

These characters need to be unlocked through special objectives.

Clone Characters are characters that share a large part of their movesets and traits with other characters. Crash Co. has stated that when making clone characters, they were intended to be designed to have relationships to their base character similar to Dr. Mario or Ganondorf in the Super Smash Bros. series; they would share a lot of the same traits, but be different enough to allow them to gain their own spot on the roster. All clone characters are unlockable, and have their own section on the character select screen.

Bosses can be controlled by players in Boss Battle mode. They cannot be defeated by the other players, and only exist to make battles more wild and intense. Unlike the playable characters, Bosses control quite differently from each other.

Retrieved from "https://fantendo.fandom.com/wiki/Stampede_Breakfast_2?oldid=2577608"
Community content is available under CC-BY-SA unless otherwise noted.