“Staaaaay fresh!”
— The Squid Sisters, when signing off Inkopolis News

The Squid Sisters are a duo of idol Inklings from Inkopolis, consisting of Callie and Marie. Together, they host the Inkopolis News, where they announce current events and new map or weapon updates. The Squid Sisters also host a kind of event known as Splatfest, in which two sides tussle it out and get an amount of Super Sea Snails based on their Splatfest title and which side they've taken.

Despite the name, Callie and Marie are actually cousins, not sisters.

Callie is the Squid Sister with the black, long tentacle hair and black-and-magenta clothes, while Marie can be recognized by her white, short tentacle hair and her black-and-green clothing. Both Squid Sisters have golden eyes with upright crosses as pupils. They also wear black shoes and hats that resemble variants of squid sushi.

Inkopolis News starts every four hours, in which Callie and Marie usually announce the current stage rotations for both Regular Battles and Ranked Battles in a manzai-esque routine. Callie usually acts as the "funny guy" during these routines, while Marie acts as the "straight guy". When they aren't doing news segments, they can be seen in their studio at a table.

When a Splatfest is coming, the Squid Sisters each pick and represent an opposing side based on their tastes (Callie usually picks the left side, while Marie usually picks right). During the actual Splatfest, the Squid Sisters perform a concert in Inkopolis Plaza, on top of two trucks decorated with a stage. Their usual magenta and lime green color scheme has also changed to the colors representing the Splatfest, with each Squid Sister picking the color of their own team.

As a duo of pop idols, they have also performed a few songs, such as "Calamari Inkantation" (based on a folk song from their childhood locale) and "Ink Me Up" (played during Splatfest matches). 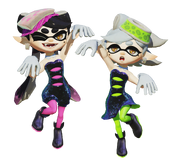 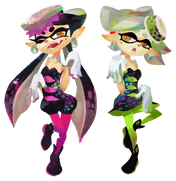 Callie and Marie as teenagers, playing Pokémon Red and Green against each other.

Callie and Marie playing Pokémon Red and Blue against each other.

A guide for the choreography of the Calamari Shanty dance, featuring the Squid Sisters as children

Callie and Marie selfie in Paris

Off the Hook Live concert poster, feat. the Squid Sisters as special guests

Artwork of the Squid Sisters and Off the Hook, for the Octotune Soundtrack Limited Edition's sleeve

Off the Hook Splatfest artwork for Mushroom Mountain vs Bamboo Shoot Village, featuring the Squid Sisters, which also had this Splatfest before 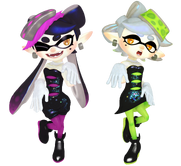 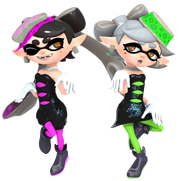 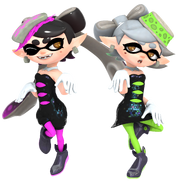 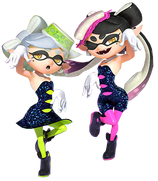 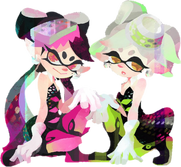