Spring Man is one of the default fighters in ARMS. He's actually the latest ARMS fighter to join the ARMS League Grand Prix, representing the Spring Gym, at which he works out. His associated stage is Spring Stadium.

Spring Man can charge up his ARMS permanently when he's in a pinch.

Spring Man appears to be a regular human being, except the irises of his blue eyes have a spiral pattern, and his ARMS resemble metallic, sky blue and pink springs. Outside of the tournament reveals his hands are also blue, wearing pink sweatbands with his logo on it. His extraordinary cyan pompadour is coiled up to resemble a spring, making it seem fake. he also wears a pink face mask.

His outfit consists of a white shirt, gray shorts, pink boxing boots, and pink torso armor with his logo on it.

Spring Man alongside Ribbon Girl (who is his Echo Fighter) were the first two newcomers of this game. Spring Man use various ARMS in each attack. His gimmick involves having his left and right arms done by two sets of input commands. Spring Man can use left ARM with one input and another with a right ARM. For instance, he can use the Toaster which are his neutral attacks with his left and can use the Megaton which is his Up Smash in his right arm. His Final Smash involves doing a flurry of punches similar to DK and Little Mac, except it is done by holding the neutral attack button. In addition, Spring Man also has ARMS Jump / ARMS Hook as his Up Specials. 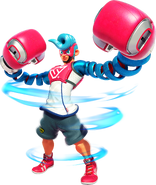 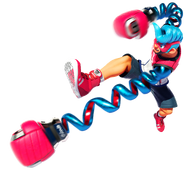 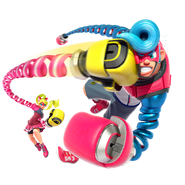 Spring Man saving a child from a car 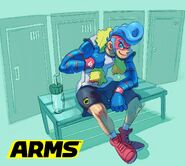 Twintelle and Spring Man working out 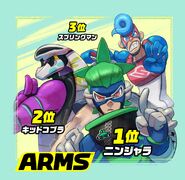 Ninjara, Kid Cobra and Spring Man showing their rankings as the most popular choices during a Global Testpunch 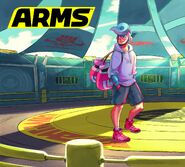 Files about the masks of Ribbon Girl, Spring Man and Twintelle 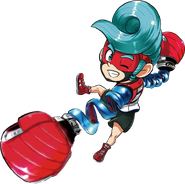