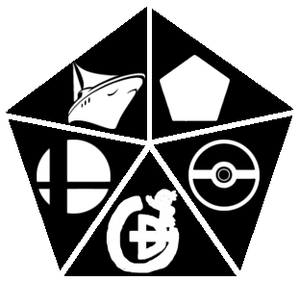 A flashing light is seen in the middle of the screen as it grows brighter and the edges extend to form the Smash logo. The screen then flashes to white and begins the trailer.

The trailer immediatly starts off with the sight of a pair of Bullet Bills flying at high speeds across a dull grassland. The two bullets are followed by an onslaught of enemies from the famed Mario franchise, all marching forward. The scene quickly shifts to the other side, where a Cape-wielding Mario is shown riding on Yoshi towards the horde of enemies. Most of the enemies are quickly dispatched, with Yoshi eating some of them to make eggs for projectiles while Mario occasionally hops off and drives the forces away with a Cape swing. However, one powerful Charging Chuck manages to knock Mario away, leaving Yoshi on his own to reach the source of the monsters.

The scene zooms in on a tower drenched in dark clouds and lightning flashes, as a small figure with sharp glasses is shown. A side view of this figure is shown before he pulls out a wand and points towards the lone Yoshi. Many of the enemies begin to put their focus to the dinosaur, but Yoshi continues to parade through and defeat many of the enemies. He eventually makes it to the tall tower, equipped with a single egg, and leaps up to the shadowed figure. Yoshi prepares to throw the egg at the figure while said figure charges up a magic blast, when lightning flashes: this lightning features a scene of the same two combatants from the past, where Yoshi carried Baby Mario and the other cared for Baby Bowser.

The screen blacks out before a familiar laugh is heard. Lightning strikes multiple times before finally revealing the cloaked figure to be none other than the Magikoopa, Kamek. Kamek is shown teleporting onto a Bowser's Castle Stage, laughing before flying off on his broom. He's shown trapping multiple opponents in a magic wand attack before sending them flying. Kamek follows up the attack with a slash of his wand, creating an arced barrier. He uses a fireball attack to break the opponent's shield, and then finishes off with a large hammer.

Kamek is then shown against Mario, summoning different types of minions. He sends a Charging Chuck to go tackle him, uses a Boo to deflect Mario's fireball, and summons a Thwomp to spike him from above. A small Shy Guy minion is shown walking towards Kamek, but he easily dispatches of it with the same giant hammer from before. He then shows up on his broom and casts a spell on some Yoshis, which makes them weaker and unable to defeat the onslaught of minions arriving. Kamek finishes off by riding his broom across the screen and trapping his foes in portals to lower their stats, before the portals implodes. Kamek is shown one last time, sitting on his broom and laughing, before he points with his wand towards the screen, causing a bright flash that reveals the Super Smash Bros. Crusade logo. 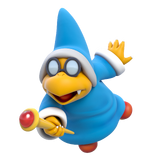 Kamek is now a playable fighter!

Retrieved from "https://fantendo.fandom.com/wiki/Spooky_Scary_Fantendo_Showcase/Previews/GD_Gaming_Studios?oldid=1867397"
Community content is available under CC-BY-SA unless otherwise noted.