"Long ago, the lands were tamed, and roamed by legendary adventurers! Of all heroes, none shone brighter than Shovel Knight and Shield Knight..."

What if things were different? In Shield Knight, you'll get the chance to embark on a brand new adventure across vast lands to save the Blue Burrower, Shovel Knight, from within the Tower of Fate. However, this isn't just a genderswap mode: there are plenty of new and fresh ideas in the game to make sure that Shovel Knight and Shield Knight remain two very different, yet connected games. Here's just a few of the things you can expect to see in the game...

Shield Knight as a playable character!

This was an obvious answer, but through your journey you will be playing as Shield Knight rather than Shovel Knight. Compared to Shovel Knight, Shield Knight is not the greatest attacker in the world. Without her shields, she is very frail, so make sure you protect yourself often. By holding up, you can raise your shield to deflect attacks, and by pressing A, you can fire a small shield disc that works as a boomerang. You can even aim in different directions by holding arrows before you fire. In addition, you can perform a glide across gaps by holding the jump button after pressing it once.

Co-op is also available right from the start, allowing up to two players to cooperate in levels as well as participate in special multiplayer-exclusive dungeons. With 2 Shield Knights, more advanced techniques can be used to move forward, such as carrying and lifting up one player using another player's glide, and reflecting the throwing shield off of a large shield to change directory. With the Shovel Knight amiibo, you can even bring along a Shovel Knight partner to play with: complete with relics and upgrades saved from the original Shovel Knight game!

All new worlds to explore!

Almost none of the levels are repeated from the original Shovel Knight game: and when they are, they often have at least a few changes made to accomodate the new playstyle. Many brand new dungeons and locales are available for Shield Knight to enter, giving her the perfect chance to show off her skills. There are a few hidden secrets around the world map as well; you might get some good upgrades if you manage to clear what awaits you within them...!

A completely different cast and Order of No Quarter!

Most of the original Order of No Quarter will be living peaceful lives and can potentially be seen hanging around friendly faces such as Black Knight and the Troupple Acolytes, thanks to not being drafted to serve the new Enchanter...but a completely different batch of 8 knights stand in your way! Whether it's through friendly competitions or high-stake battles, you will go against many powerful foes...and perhaps even a few rejects that might even know a thing or two about the Order's secrets! Check out every member of the new Order of No Quarter below: 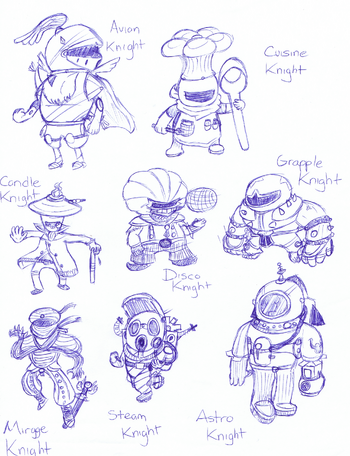 More info on Shield Knight will be revealed later in 2015! 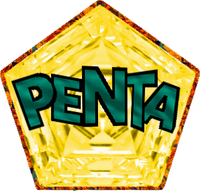 Meet Penta! GD Gaming Studio's first attempt at a fighting genre game, it takes slight inspirations from former fighting umbrellas such as Kaleido Conscripts and World Wide Warriors, mixing their formulas into a different sort of battling experience. Rather than pulling characters from different series, however, Penta features a completely original set of characters with a focus on a mythological-inspired world and cast. Speaking of casts, let's introduce the first character! 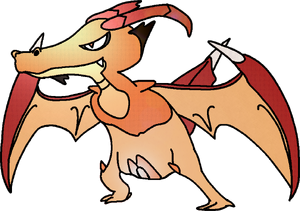 This is Yveil! Yveil is a rogue sand wyvern who is very cunning and can apply his knowledge to good use... however, rather than using his knowledge for something beneficial to the world, he ends up applying his wisdom to stealing artifacts and supplies from others, and eventually becomes a top-rank thief. In combat, Yveil can create quicksand pits across the stage to quickly teleport, and features many aerial combos utilizing his wings.

Oh, and I guess I should probably elaborate on the battle system a little bit, shouldn't I?

Rather than percentage meters or life bars, a fighter's health is represented by their Sol. When attacked by another fighter, Sol will be released, with greater quantities of Sol dropping after being attacked numerous times without the chance to recover. This Sol is important to the power of a combatant, and can be used to boost your passive abilities as well as perform stronger attacks.

In order to retrieve Sol from other fighters, players have a few options. Each character has a unique mix of Standard and Set Attacks. Standard Attacks are weaker and often used for comboing, with a different set of Standard Attacks on ground and in the air. Set Attacks are more unique and are often used for setting up chains of attacks, and generally don't change as much in the air. Each character also has a Counter Shield, which can be activated only a few times a match to take an attack's damage and counter back with it.

The main form of fighting will have the player with the most Sol at the end of a match win, but there are other options to include reaching a set goal of Sol, or collecting enough Sol to use your special abilities and attacks to decimate the other opponents. In addition, plenty of other sports and modes will be available in the game to diversify the experience.

More about Penta will be revealed in 2016!

Retrieved from "https://fantendo.fandom.com/wiki/Spooky_Scary_Fantendo_Showcase/Presentations/GD_Gaming_Studios?oldid=1871710"
Community content is available under CC-BY-SA unless otherwise noted.