Spongebob Squarepants is the titular character and main protagonist of Nickelodeon's TV series of the same name. He is an anthropomorphic sea sponge who lives in the underwater city of Bikini Bottom.

SpongeBob appears in Nickelodeon Ultra Struggle as one of the main characters, who must unite with other Nickeloverse heroes to fight back against Shredder's plans to wipe out their dimensions.

One of the directors has stated that after Ultra Struggle, SpongeBob will become less important of a character, with the explanation that "there's just not much we can really do with him." However, he will still have a role in the new universe that will be formed after the saga.

Spongebob is a cheerful and optimistic young sponge who loves blowing bubbles, cooking Krabby Patties or quite simply hanging out with his best friend Patrick Star. He can be immature sometimes, but he is willing to help out whenever he gets the chance. 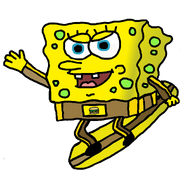 SpongeBob in Mario and SpongeBob at the Olympic Winter Games 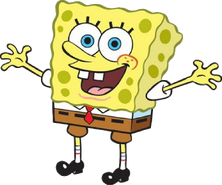 A screenshot of SpongeBob and Patrick in Mushroom Gorge, when they were originally going to appear in the anime.

Spongebob, Wario, and Rosalina are attacked by a car alien, a character that was also scrapped from the final production. 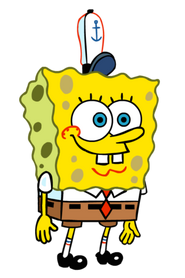 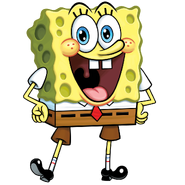 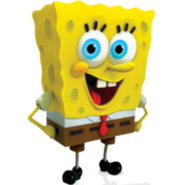 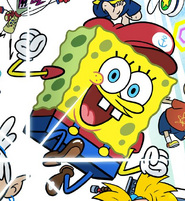 Spongebob is cosplaying as Mario. Based from the Crossover of Super Smash Bros. Ultimate x Nicktoons
Add a photo to this gallery

Retrieved from "https://fantendo.fandom.com/wiki/SpongeBob_SquarePants?oldid=3209520"
Community content is available under CC-BY-SA unless otherwise noted.