“So, you have finally arrived. I have been waiting for this. It is time for your destruction.”
— Splitz, Super Mario's Split Kingdoms


Splitz is a mysterious creature, who is only half human. He was discovered to be the son of Blumiere and Lady Timpani. He first debuted in Super Mario's Split Kingdoms where he invaded the kingdom with his minions. He has fallen in love with one of his head minions Tuneette, but he still treats his other two head minions, Queen Peepa and Discardil, with the utmost respect. Upon his invasion, he first had the desire to destroy the Mushroom Kingdom. However, he now resides in the Mushroom Kingdom in peace after his defeat.

Similar to his father, he has a form of an unknown creature, but he also has a human form. These forms both have alike attributes, including the same color scheme. Both forms also have different powers. The first time he is seen in his human form is at the ending of Super Mario's Split Kingdoms.

Splitz highly resembles his father during the form he takes in the Storymode of Super Paper Mario. The lower half of his dark body is covered by blue and purple clouds. His body has several spikes on it, but Splitz never harnesses these in any attack. He wears a white top hat upon his head. He does not have any facial features other than his sharp eyes.

He has two four-point stars that seem to connect his arms to his body. At first glance, the stars and arms seem to be floating, but they are connected to the body by some mysterious property.

Splitz still has a black aura in this form, but he certainly appears less ominous due to his familiar appearance. He has shiny black hair that is combed down, as well as fair skin. He has blue eyes and a sharp nose. He has a full and muscular figure, but he wears an unzipped leather jacket with a navy t-shirt. He wears gray pants with glistening silver shoes. He has a confident position with his left arm resting on his stretching right hand.

Most of Splitz's background is unknown. Lady Timpani and Blumiere have never been heard from since the events of Super Paper Mario, but Splitz never shares the story of his parents nor his own story. It seems that his minions never share the story of meeting him either. Splitz has ventured from a distant kingdom, but he eventually traveled to the Mushroom Kingdom. His minions, after noticing him transformed into his human form, commented that they had no idea that Splitz had a human form.

Splitz never appears to be a social type, but he usually seems preoccupied with his chaos. He only cares about his closest minions, especially Tuneette, but he uses techniques to try and appear appealing to others. Splitz, though he does not like him, also has a high respect for Mario after he reunited his parents.

Splitz attempts to become more pleasant after transforming into his human form. But, he prefers just to live in isolation alone with Tuneette. He has joined in the happiness of the Mushroom Kingdom, but he still has a dark side to him that prefers evil, though he never shows it.

Splitz has the power of teleportation. The teleportation is an amplified version of his father's flip ability.

Mainly though, he has various powers that control properties, such as black holes, dark matter, and black clouds. There are many of his powers that are not listed here, such as his control of rocks and the creation of cliffs.

It is vague what Splitz's relation ship with his parents is. Apparently, he left his parents to begin a quest for evil and chaos. He never makes a reference to his parents in Super Mario's Split Kingdoms, denoting that he is no longer in contact with them.

Tuneette and Splitz, despite being of drastically different species, have a romantic relationship. They seem to have been fond of each other from the moment they met. Upon Tuneette joining Splitz's party, he promoted her to a high position as one of his head minions. They currently live together in isolation.

Splitz and Discardil have a very interesting bond. Splitz first met Discardil at a young age when Splitz first left his parents. Discardil mentored Splitz in chaos and discord, being a want-to-be villain himself. Splitz looked upon Discardil as his idol for many years, but now he understands that he was simply being played by Discardil, who was using him to his own advantage.

Splitz believes that Queen Peepa is a very likeable creature. He enjoys her sense of humor, and he thinks that she brings some humor to his often-serious conversations. When he first met her, he instantaneously knew that she would become a very helpful minion to him. Even after she has left him for King Boo, Splitz still loves her company. 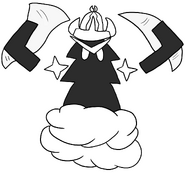 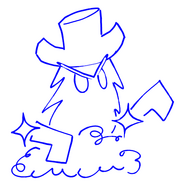 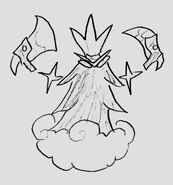 Retrieved from "https://fantendo.fandom.com/wiki/Splitz?oldid=3213368"
Community content is available under CC-BY-SA unless otherwise noted.