Splatoon Splash-Out is a team-based third-person shooting game made by Gear Games and published by Nintendo, and available for the Evo-Gem console, seperated in the handheld tablet and home console versions that can be played together in cross-platformer. While the two versions are the same, the differences is that the Hero Mode had different stages, story and its mechanics as well as the final bosses being fought in different order.

The game retain the traditional gameplay of the Splatoon series but had several tweaks to make the situations much less luck-based. For instance, in Turf Wars, both teams will have nearly equal levels (i.e. all players have around level 20) and in Ranked Battle, the Rank of the players will all be in the same letter (such as all A-, A and A+).

The traditional gameplay is, as an Inkling or Octoling, to splat the other players with the weapons that uses inks, as well as covering the surfaces to become a squid (or octopus in the Octoling's case) to swim through it for increased speed. The goal varies from Turf Wars, Ranked Battle and Casual Wars in multiplayer, but splatting an opponent will only cover more grounds, as there is no Deathmatch or any alike in this game.

The players have four arsenals; the Main Weapons, the Sub Weapons, the newly introduced Gadget Weapons and Special Weapons.

The most notable addition is the Tera Transformation. It is temporary in the small areas (4-vs-4) but permanent-until-defeated in larger areas (20-vs-20). The two ways to become a Tera Inkling/Octoling is to eat a Super Sushi hidden around the field (where it is generated near the losing team's spawnzone) or as a Revenge Rampage (when splatted by the same opponent four times).

The Tera Inkling and Tera Octoling are huge and powerful version of Inklings and Octolings, respectively, and can defeat any regular enemies in one stomp or tentacle swing, or by using the multiple-thrown Sub Weapons (if the Sub Weapon is not offensive, spit an Inkshot). It takes a huge amount of damage but as they are six-time the size of the regular players, they become easy targets. A defeated Tera Inkling/Octoling will splat out and cover a big area, which is significant in a small stage. However, the Tera Inklings and Octolings are immune of water, and can swim through there to sneak through, although whatever they are on land or on the water, they cannot perform a Super Jump and for some reason, unable to shift into their squid form. This is possibly to be consistent of the Kaiji monsters reference.

The two aesthetic but fun way to interact with other players are Show-Offs and Taunts. Show-Offs are used in both entrance and in Inkopolis and do a showy pose, or other action such as a cut-throat, a grimace or even wish them good look, either sincerely or sarcastically. Taunts can be performed in battle but unlike Show-Offs, all have a different effect, and few of them can actually work better as a Tera Inkling/Octoling.

Most Taunts are fast and short but other are holdable and can make longer effect. It should only be used when really safe, as most of them have effect on allies and those who affect negatively the enemies have a very long range, but only if the player's character can see them.

There are old and new modes included in this game. The Turf Wars, Ranked Battle, and Casual Wars requires online connection such as Connext to play with other players and level up or gain a new rank, but all can be played locally and the aforementioned three can be played with up to four players with the addition of computer-controlled players.

There are now three places to visit; the Tradink Town (based on Traditional Japanese) where the player can rest and chat with the other players, the (city from Splatoon 2) and Inkopolis. The latter two retains all of the previous features but some Weapons and other features are exclusive to one to another.

The Turf Wars is the simple and classic gamemode of the game. The goal is to cover as much floor as possible (walls do not count) and prevent the enemy team from doing so. If the losing team is on danger for thirty seconds, the latest splatted player of that team will undergo a Tera Transformation to turn the tide.

The team who covered the floor the most, after the timer runs out, wins the match. This type of match will raise your Coolness Level (the same level from the Splatoon original game) and you will gain more as you win and also by covering more turf.

The Turf Wars is available from the start and the player can enter this gamemode at anytime.

The Ranked Battle is different from the normal Turf Wars; it include various objectives other than covering the most turf and instead of giving levels, it will instead change the Rank of the player. Unlike most Splatoon games, this game instead change your rank depended how active you are and how much focus you put on the objective, instead of winning or losing that decide it.

Also this time, the player will win quite more Rank Points than usual and loses less, but the player will automatically Rank down if caught for cheating (via hacking) or not doing the objective unless getting splatted constantly. The losing team's players will not lose any Rank Points if there is a teammate that disconnect before or during the match. Unlike the previous Splatoon games, the player will actually gain as much experience points and Coins as the winning opposing team as long as it does not slack around.

The player requires the Coolness Level 10 to be allowed to play any of these matches. Also, the Ranked Battle will cycle at four hours, preventing the same Ranked Battle type from being constantly chosen.

Although the League Battle's matches plays similarity of the two above main modes, but it consist of multiple "leagues" of two, four, or when they chose Big Maps instead, eight or sixteen players as a team. In case of two or eight, the missing numbers will be filled by the other team.

What medal the team will receive largely depends on winning and losing. Winning many times will rewards a bigger and better medal, but only losing will results a rotten copper medal instead.

Like Ranked Mode, the server will more carefully distribute the opponents that would have the same Rank of the players, and this goes for recruited teammates. This is to prevent unfair outcome and one-sided fights.

Obtaining enough medals will also give you a Threat Level; the higher the Threat Level is, the more likely your opponents will acknowledge how dangerous you could be, and the more the teammates would likely like to team up with you again.

The new Hero Mode take place in the Rebellous Oversea (not an actual sea but is on a drought formations of big sea shells, corals and sea sponges). It is revealed that DJ Octovio would not be a final boss but might be faced in the middle of the mode.

Also unlike the previous Hero Modes, the player have to face the Inklings and Octorian alike does to them being controlled by an antagonistic Inkling called Seafear, who despite her species name, is immune of water and can even control it. The bosses will also include various species, like a jellyfish and a new Octorian boss, as well as species never seen in Splatoon before such as a lobster and an oarfish.

It is revealed that the game itself take place after the events of Splatoon 2, five years ago, after a prolonged drought during the previous year before the current event.

The Salmon Run returns from Splatoon 2, this time allowing up to eight, twelve, sixteen or even twenty players in this co-op mode does to larger stages or more active threats.

The Special Supply works differently; while the Supply only applies to Splatoon 1's Special Weapons as "Emergency Weapons", the regular Special Weapons from Splatoon 2 and introduced in Splash-Out are charged as normally, in addition of able to charge when splatting out Chums and their variants. The player can switch between them with the M button.

In addition of all returning Salmon Run enemies and bosses, new Salmonoid bosses are introduced, which while most of them are vulnerable, can immediately jump into the battlefield unlike other Salmonoid bosses.

Super Sushis are rarer (with the exception of specifically made waves, where there are only one), but as Tera Inklings/Octolings, they can survive any hits, and Maws and Smallfrys are useless against them, as well as able to trespass the ink-immunity of all Salmonoid bosses without even needing to hit their weak spots.

To prevent potentially unwinnable situations, all waves are pre-set and enemies waves and bosses, as well as conditions, are not randomized, and there are 20 possible waves in each mission so far.

Before each waves, the players can choose which base weapons they can choose. The players can also see what enemies comes next for the next wave during the weapon selection.

Arcade Mode is a new mode that allows the player to practice their skill without facing high-level opponents or frequently used equipments, and it got two way to plays in this mode; Ladder and Practice. It is found in Inkopolis's new building, the Virtual Arcade.

In Casual Wars or on certain servers, there are Power-Ups dropping from the sky. The player simply have to touch it or splat it to gain the boost. Some of them actually only affect normal Inklings/Octolings, as Tera Inklings cannot be affect by the mentioned Power-Ups. Certain Power-Ups do instead give negative effect on the splatted opponent when the latter one will respawn.

Tera Inklings are still available in Skill Match, but only in Big Maps.

There are old and new stages that can take place in Turf Wars, Ranked Battle and Casual Wars. There are the old stages and the 20 new stages, which old stages means that they are from the original Splatoon game while new stages can be settled in either small or large.

The old stages had changed both does to the events during six years since the original Splatoon and also to accomodate with the Tera transformation as well as new Main Weapons and Gadget Weapons.

As mentioned above, there are four type of weapons that are available in Splatoon Splash-Out. Most new Main Weapons are either Rollers, Chargers, Sloshers, Splatlings or Squirtlers, considering the large amount of Shooter Weapons in the original Splatoon.

It is now possible to mix and match the Main Weapon, the Sub Weapon, the Gadget Weapon and the Special Weapon, but to obtain any of the latter three, you need to buy the Main Weapon that have a set of any of above you haven't obtained yet.

For Rollers, Chargers and Sloshers, the Damage is the average of any circumstances combined

The Special Gears are those that cannot be normally found in shops and requires to be found in Hero Mode. 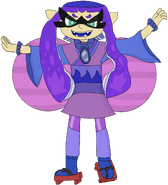 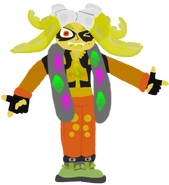 Alba
Add a photo to this gallery

Retrieved from "https://fantendo.fandom.com/wiki/Splatoon_Splash-Out?oldid=2852671"
Community content is available under CC-BY-SA unless otherwise noted.