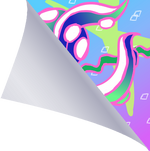 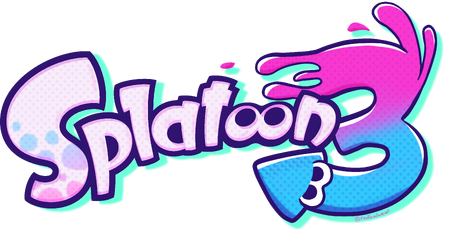 Splatoon 3 is the third game in the Splatoon series, released for the Nintendo Switch. It keeps a similar core game, but aims to shake things up significantly, to keep the experience fresh even for seasoned players. Splatoon 3 introduces two new idol groups - Rising Tide and Radio-Octave - with Radio-Octave often interrupting Rising Tide's broadcast. Splatoon 3 also has several options for local play, as well as an expanded Hero Mode.

For a list of News Broadcast dialogue, see here.

DISCLAIMER: Due to the nature of the table, there is a possibility that the same map may appear more than once.

Parkour has hit the streets of Inkopolis, and it's made its way to Turf Wars! By using

, a variety of actions can be performed. This helps to spice up gameplay, give maneuverability options to weapons like Splatlings and Chargers, and give players a wider range of options at any given time.

At any time during a match, using

to open your map will allow you to use Echo Location. Just hover over an area on the map and press

to send a message to your team highlighting that location both on the map and in the heat of battle. It's really handy to alert your team of a dangerous enemy, an uninked path, or anything else, really!

Many weapons have gained new functionality for greater diversity in battles, and to account for brand new Actions.

Splatoon 3 sees a lot of changes in looks from its predecessors. In general, the interface looks a lot sleeker and modern, while still remaining in-line with the Splatoon aesthetic. 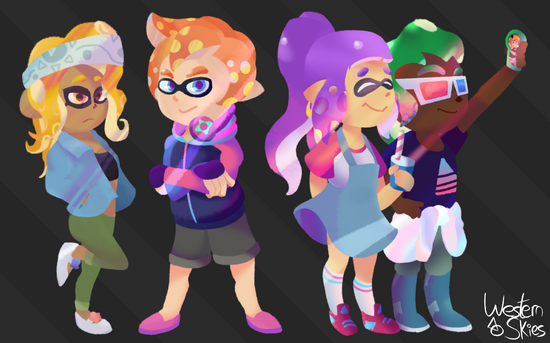 Octolings must be unlocked by completing the Electric Slide story. New to Splatoon 3 is your Primary Colour. This will match your eye colour, and turns the tips of your tentacles into a new gradient, allowing you to stand out no matter what!

Just outside the Deca Subway Station, underneath a small shelter, is a scratching post, where you'll find Judd and Li'l Judd.

Talk to Judd to receive statistics on your last 20 matches, including splat ratio, turf inked, and overall freshness! In addition, you should talk to Judd whenever you level up, as he might have a special reward waiting for you!

Li'l Judd loves to watch ink battles, and has a few tips and tricks up his collar that he's willing to share. These are randomly selected each time you talk to the little fella, but some tips are locked behind levels. 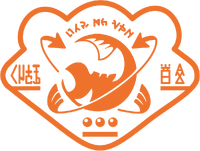 Salmon Run is an exclusive game mode accessible by going to GrizzCo. during open hours. Your aim in Salmon Run is to defeat Boss Salmonids to collect Golden Eggs and meet your quota for the three waves. You're supplied with a rotation of weapons and two Super Weapons to combat Salmonids. If you're splatted, you'll retreat into your lifesaver and must be inked by a teammate. If you fail to meet your quota for a wave or your team gets splatted, your shift will end prematurely.

Though normally you'll have to wear the mandatory GrizzCo. uniform, equipped with several safety precautions, Mr Grizz has recently brought in Casual Fridays. You can wear your own clothes to Salmon Run on Fridays, but keep in mind that your abilities won't matter.

GrizzCo. Weapons are illegally modified versions of existing weapons, only available during wildcard rotations. These weapons perform much better than usual, such as the GrizzCo Charger charging fully with the tap of a trigger.

Each team member will be randomly assigned a Special weapon. Throughout the duration of the shift, a Special Weapon can only be used twice. The Specials of each team member and how many uses are left are displayed in the HUD. 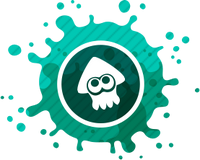 Downtown Inkopolis is a popular shopping district, or just a chill place for Inklings to hang out. It's the new hub for Splatoon 3, and is bigger than the previous hubs. It encourages exploration, as it hides many secrets. 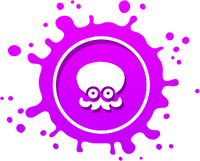 Octo Gorge is the greater location of Splatlantis - the recently discovered home of the Octarians. The Squidbeak Splatoon are stationed at the entrance to Octo Gorge, and you're their latest recruit.

As you journey through Hero Mode and other activities, you'll progress from Octo Gorge into Splatlantis, where you'll find a much more open city-themed world to explore.

For the main article, see here.

In the final fight against the Octarians, you'll take the role of Agent 7 of the Squidbeak Splatoon. You'll work alongside leaders Callie and Marie, and rookies Agent 5 and 6 as you make your way into Splatlantis to take on their mysterious new leader.

The Secret Sea Snail Society is a mysterious organisation with posters scattered around Inkopolis. If you can follow the hints on the posters and figure out the secret password, you'll be allowed into the Society. In reality, it's not a cult or anything... it's just a bunch of young Urchins playing video games. They offer a number of easy ways to rack up Sea Snails.

The Tentatonne Gym is an area where Inklings can train before they take part in Turf Wars. It offers options for singleplayer and local multiplayer, as well as having various training courses available, instructed by Sheldon.

All the youth of Inkopolis have an inkPhone! They're all the rage nowadays. You can use your inkPhone to order gear from the Secret Sea Snail Society, receive updates, review patch notes, check your gear, and the current stage rotations.

Your inkPhone also doubles as your menu, zoom in and camera feature, and it's your preferred means of watching Rising Tide's news broadcast! Of course, you can always just press the home button to skip the broadcast.

Buy purchasing songs from Off the Hook's music studio, you're able to set up a playlist for yourself! These songs will play during battle, and you can even select which version of Now or Never! you'd like to play during Turf Wars. However, you can't use a playlist during Splatfest Battles.

Your inkPhone case will change colour to match your current ink colour, or you can ask Murrch to sell you a solid colour inkPhone case. If you have a Splatoon series amiibo, you can use that amiibo figure's unique inkPhone case. There's also the Pachinko Machine outside the Deca Subway, where you can get a Gachapal - a cute keychain for your inkPhone or weapons!

Gachapals are collectible kaychains for your inkPhone that you can get from the Pachinko machine in Inkopolis. They're styled after a mysterious item known as a "Mem Cake", and were produced by an individual known as CQ. However, it's not known who writes the descriptions.

Alongside Stickers, select Gachapals can be attached to certain weapons to add some extra flair. 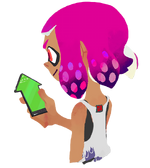 SplatNet makes a comeback in Splatoon 3, as part of the Nintendo Switch mobile app, or available from the official website. It's handy for checking your stats on the go, or setting up pre-saved gear sets. Of course, the main draw is the exclusive gear available from the SplatNet shop, which can be picked up at the Secret Sea Snail Society HQ. These can be regular clothing with unique abilities, or Nintendo-brand gear based on famous characters!

The Coroika manga continued upon the release of Splatoon 3, opening with a brand new arc featuring many returning teams, some new competitors, and a mysterious, yet powerful team that seem unbeatable. Can Team Blue win the Electric Current Tournament? 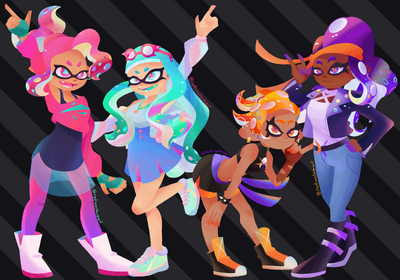 Taki runs a franchise store of Ammo Knights, and she'll handle your weapon dealings. She's in the good books with ink battle representatives, and they'll allow you to customise your weapons with Gachapals obtained through the Pachinko Machine, and Stcikers obtained through battling! Of course, all changes must be run by Taki.

Splatfests are events that occur normally once a month, lasting an entire weekend. They're massive festivals during which two teams compete to see which of two things is better. During Splatfests, you are limited to Turf Wars on 3 maps, one of which being a variant of Shifty Station. You will get Sea Snails depending on how well you did during the Spltfest, and if your team won or not.

Depending on who is conducting the Splatfest, both Rising Tide and Radio-Octave will appear in Downtown Inkopolis. For example, the Tea VS Cocoa Splatfest only featured Rising Tide. Both groups have setlists now, and cross-group Splatfests will feature exclusive collaborations and mashups.

In addition, the results formula for Splatfests has been updated. Popularity plays a key role, and is arguably more important than either of the other two aspects. Wins now encompasses both Solo wins and Group wins. Mirror matches have no effect on wins, but do affect Dedication. This statistic is determined by how many hours are put into Splatfest Battles relative to the amount of votes it received.

A few Splatfests will be celebrated as Events, much like Splatoween and Spring Fest in Splatoon 2. These events see Inkopolis and its battle areas redecorated for the duration of the event. It's also highly likely that there'll be exclusive items or weapon skins. And Rising Tide or Radio-Octave might even have unique onstage outfits! 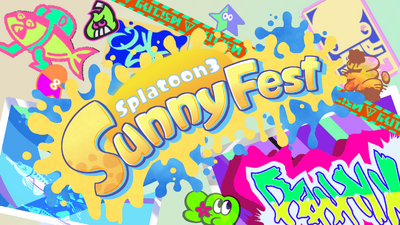 The Sunny Fest is celebrated when a heatwave hits Inkopolis, and the sun seems to stay out much longer than usual. It's kicked off with a special Splatfest where all the stages are decorated accordingly, and all take place at sunset instead of night. For the next 5 days after the Splatfest, stages will retain their makeovers, and the sun will be burning even brighter than usual. And to wrap things up, another Splatfest! 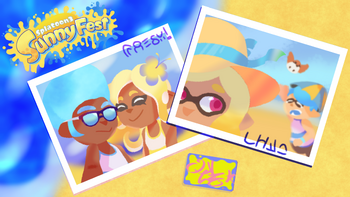 The Sunnyfest also brings with it 4 new headwear items! In order, they're the Saltwater Shades, Equinox Blossom, Saturated Sunhat, and the Beach Bowl Cap. These are all created by the Vaykay brand, and won't be available from regular shops, but can be ordered if you see a squid rocking them.

By filling certain criteria, your Splatfest team will get a unique name! Try mixing and matching weapons and outfits with your friends to create the ultimate Splatfest squad!

Each Splatoon series amiibo has several functions. As you become fresher and fresher, they will gift you with gear and a reskinned weapon. You are also given the option to take a picture with the amiibo, with each having a set of unique locations and poses. In addition, each amiibo figure can save a gear setup and control settings to itself.

When these amiibo are tapped in, their corresponding weapon will become available for purchase in Ammo Knights. The game will switch to a quick Rising Tide news segment announcing a new weapon.