Spike Tops are quadruped enemies that appear semi-commonly in the Mario series. They are red-colored Buzzy Beetles that will walk slowly along the ground, as well as hug to walls and ceilings. They have a large spike on their shells, meaning Mario can't jump on them, and they retain the Buzzy Beetle's defense against most projectiles. As such, they usually act more like obstacles than enemies.

Blue Spike Tops, first introduced in Super Mario Maker, act exactly like Spike Tops, but are faster and are more difficult to avoid.

Paper Mario: Search for the 8 Stars

A Spike Top makes an appearance as a playable character in Mario Party Blitz. Its special Dice Block has very high numbers, though it also has two sides where it can lose Coins, making it quite risky. 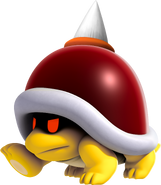 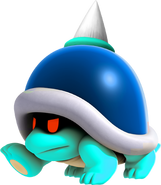 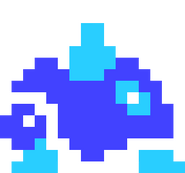 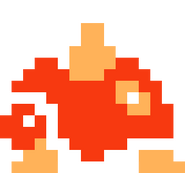 Add a photo to this gallery
Retrieved from "https://fantendo.fandom.com/wiki/Spike_Top?oldid=3304037"
Community content is available under CC-BY-SA unless otherwise noted.