Soul matter is a evil deity, dark matter and a powerfull leader of the dark Render, where he rules the dark forces. In Mario and Kirby: A dark adventure he is the main antogist and final boss. He enter the world in a avatar of a dragon.

A thing of pure darkness, Soul matter is the perfect creature of emotionless, become a figure of pure evil he was there when the lights imprisoned the shadows at the begin of the universe. Now he try to awaken and at last finnaly assault his enemy. He was actually a dark matter but he lost abbonded his kind to become a even more evil creature.

Unlike the other dark Renders, Soul Matter does have a original form but because he abbanded the dark matter he is doesn't like to use his original form. Also because of that he is the only of the dark Render that feel emotion that would make him unique.

Soul Matter is a powerfull leider his rank is not so high as Despair who is the leider of the Dark Render's, that only makes him jealous, try to surpass him and become the main ruler.

Later Soul Matter begon the hate the light more, he captured lightbinder Adur( one of the responsible of the light) youngest daughter Yar, killing fairies right for her nose. He didn't care alot when she escaped.

When she begon the hunt him he begon the hide because of she kills him in his original form he will totally die.

Yar and the fairy's

Soul Matter is the main antogist of Yar and the fairy's.

He first will play in the intro and loading screen, and will be the first boss as the soul dragon. When the soul Dragon is defeated he will transform in his original form and disaepear. He later return in his own realm afther you defeat he who sleeps. He will face you in his three red eyes form (his true form).

“So, Yar. You are going to kill me. Then show me what you got. ”
— Soul matter to Yar before knowing that she was a threat.

“Can you believe it self. You confronting the dark Render. Why must those fake heroes always be so stupid.”
— Soul matter annoyed by the Heroes who chalange him

“We are immense, we are pure. We are gods of pure darkness! We are the void, We cannot be denied. Nobody can! At least no mortal!”
— Soul matter at low status

A design of the soul in a church 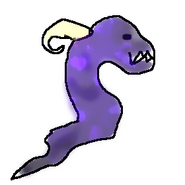 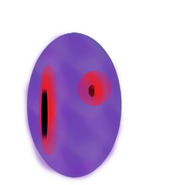 Soul matter from side

Old classic looking soul matter
Add a photo to this gallery
Retrieved from "https://fantendo.fandom.com/wiki/Soul_Matter?oldid=2377589"
Community content is available under CC-BY-SA unless otherwise noted.