Sorbetti is a recurring boss in the Mario series, first appearing in Super Mario Galaxy 2. It is a giant, white monster resembling a snowball. It has spikes protruding from its body, two ice shards on its face that serve as eyes, and a big red nose that serves as its weak point. Sorbetti resembles a snowman when paired with the planet it is battled on, best seen in its official artwork.

It bears a striking resemblance to Tap-Taps from the Yoshi's Island series, especially Tap-Tap the Red Nose.

Sorbetti first appears in Super Mario Galaxy 2 as a boss. It is encountered on Freezy Flake Galaxy, during the mission "Sorbetti's Chilly Reception". Mario initially lands on a dormant Sorbetti like he would a planet; his face is invisible in this state (though there is a large mound of snow that appears to be its nose). After taking a Sling Star to the planet below, Sorbetti shows its true form and starts battling Mario.

Sorbetti's sole attack is trying to roll into Mario to damage him. If he hits one of the planet's trees or snow pillars, it will rebound and start rolling in a different direction. In order to damage it, Mario must use a Star Spin to hit its giant red nose, which is its weak point. When struck, it will rebound back, pause for a bit, before resuming its rolling. If Sorbetti hits Mario, it will laugh for a bit before rolling in the opposite direction. After being hit three times, Sorbetti will be defeated, granting Mario a Power Star. 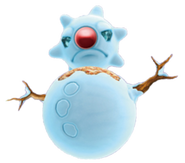 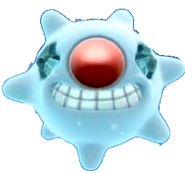 Sorbetti
Add a photo to this gallery
Retrieved from "https://fantendo.fandom.com/wiki/Sorbetti?oldid=3111618"
Community content is available under CC-BY-SA unless otherwise noted.