Sonic and Megaman is a game developed by Capcom and published by Sega.

At Dr. Wily's base, he was sitting in his room with the door locked, working on his biggest progect yet: a time capsle. He plans to go back in time when he and Light was working together so he could convice them to not make Rock. However, Megaman suddenly bust's in, demanding for Wily to surender. Like always, he does, and he is arested. The time capsle was given to Light, and he started working on it. He wanted to see what it was like in 2013. When the divice worked, however, the first thing that came out was a confused Eggman. As it turns out, he was also working on the same exact thing. This is when things got weird....

Each duo has there own story and levels.

One day, Sonic was relaxing at station square when he gets a note from Tails. Running to where he is, he see's him with Dr. Light. Tails and Light became freinds when they first met, and liked to work together on stuff. Today, they were working on a specal progect, and need all 7 Chaos emeralds to fully finish it. So they ask Sonic to help. He agrees, but before he left, Light sent someone with him to aid in his quest: Megaman.

Sonic plays like he does in Sonic Gen, and Megaman plays like...well, Megaman.

Tails was helping Dr. Light with a teleporting divice to aid Megaman in his missions when 7 robot masters bust in, being controled by Metal Sonic. They break apart the divice, and run away. Tails imedeatly went after them, but could not catch up. He then gets the idea to get Light to let him barrow a robot of his to help. The only robot at the moment, however, was Roll.

Tails plays like he did in Sonic Hero's, and Roll plays like she did in Megaman: Powered Up.

Knuckles was protecting the Master Emerald, like always, when Protoman walks by. Knuckles waves, but Protoman pays no attension. Suddenly, the ground starts shaking. The ground opens up, showing that Wily escaped jail again (even after being beaten by Sonic and Megaman) and now has "Barowed" one of Eggman creations: Chaos. Knocking out knuckles, he steals the master emerald and flys off. Luckly, Protoman helped Knuckles up, and they team to stop Wily.

Shadow was looking over the city atop a mountan, questioning his past. Right then, Bass walks next to him, saying that he could help. He says that if Shadow helps him collect 7 Chaos Emeralds, he will tell him how he was made. Shadow askes how he can trust him, and Bass leaves, telling him to find him when he dicides. Shadow, thinking about it, makes the disision to agree. However, as he left, Eggman comes into veiw, grining evily.

It begins with Cutman running from Wily's base, Finally free of his grasp after learning his true plans. He looks for Lights lab, in order to live a better life, when E-103 Gamma crashes right in front of him. Helping Gamma up, E-103 explains that Eggman, his creator, instaled a 'lerning chip' in him so he could have a better chance agenst Sonic. However, it backfired, resulting in him escaing. The two become freinds pretty quickly and decide that both there creators probablely want them distroyed. So they come up with a plan: To defeat them before vice versa.

In 30XX, both world was in Chaos. Turns out, Sigma and Nega Eggman joined to werck havoc. Silver, wanting to prevent this from happening, trys to go back in time before this all happens. Unfortenetly, his powers has been taken by Sigma. But there was still hope: Megaman X and silver, both fighting together, decide to fight back in hopes to get Silvers time travling powers back.

This story takes place after Silver and Megaman X's story. The good guys are at a Cafe' (With the exseption of Shadow and Bass), just hanging around when Silver and X suddenly appere out of thin air. They explain that in the future, Sigma and Nega neraly take over the world. They all decide to go there in order to prevent this from happening.

In this story, every character has there own portion of the level, which is in Sigmas base.

Each story has two boss fights: a rival fight, and a boss battle at the end of the story.

Sonic and Megaman vs Shadow and Bass.

Tails and Roll vs Cutman and E-103 Gamma.

Knuckles and Protoman vs Megaman X and Silver.

At the end of each story, you fight a boss. Before the boss, you get the option to play as eather the Sonic character or the Megaman character. Whoever you pick, the fight will be pretty much the same, but depending on who you pick it'll be 2D or 3D.

After the two collect all 7 Chaos Emeralds, they head back, only for Wily and Eggman to suddenly attack. They want the Emeralds in order to take over both worlds.

The fight mainly consist of Wily in a mech suit trying to blow you up with rockets. Eggman will be in the backround, occasinaly flying in and shooting lasers and droping enemies down.

After beating them, a cutscean plays. It shows the two evil Dr's being dragged into jail, with both blaming each other. Sonic and Megaman return the Chaos Emeralds to Tails and Light. With that done, the two true blues decide to get a bite to eat.

After the two retreve the parts to the teleporter, Metal Sonic shows himself. He reveles that he wants the parts to Upgrade himself so he could overthrow Eggman.

After beating him, Tails and Roll both return the stolen parts to the teleporting divice. With the combined efforts of Light, Roll, and Tails, the finally finish the divice. The first order of buissness: get some chow.

When the duo finally reach Wily's fortress, he shows them his latest creation: The Chaos Devil, a combanation of the Yellow Devil and Chaos. He plans to use this to finally defeat Megaman and take over the world.

The Chaos Devil attacks are a combanation of the twos attacks: Chaos with his arm stretching, bouncing, and glob throwing, and Yellow Devil with his laser eye, melting, and morphing.

When he is defeated, Wily retreats, leaving the Master Emerald behind. Knuckles and Protoman take it back to Angle Island and put it back on the shrine. After a short conversation, the two split, with Proto walking into the sunset.

After they find all 7 of the Chaos Emeralds, "Wily" apperes, asking for the Emeralds in exchange for Shadows past. However, Shadow refuses, knowing that this was a fraud. Angerd, "Wily" attacks.

This fight acts like the death Egg Robot fight in Sonic Gen, but with Wily and without the second phase. He trys to squash the player, shoot rockets, walks, and, after beating it, does a explosion that really hurts.

After beating "Wily", it's shown that it was a fake made by Eggman, who wanted the Emeralds. Bass got really mad and tryed to kill Eggman, but Shadow stoped him. Eggman then got away.

When the two finally got to Wily and Eggman's base, they are suprised to see the two knocked out. As it turns out, Bass took them both out, wanting revenge for the Chaos Emerald thing.

The fight is basically if Bass from Megaman 10 was a Robot master. He can shoot in all directions, Uses the metal blade and the Skull sheild, and at half heath, will call his dog and activate his robot suit.

After beating Bass, Eggman and Wily offer the two rebels a promotion for saving them. However, Cutman and E-103 denies this and leaves, with Wily saying how he should get used to this.

When they reach Sigma and Nega's base, Silver demands his time travle Powers back. As expected, Sigma denies, and he and Nega attack.

The fight is very simular to Eggman and Wily, with sigma fighting and Nega in the backround.

After winning the fight, Sigma is destroyed, and N. Eggman flees. Then Silver and X travle back to prevent this all from happening. 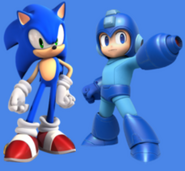 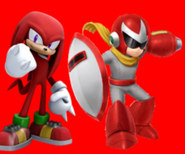 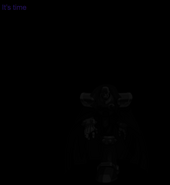 Another Teaser
Add a photo to this gallery
Retrieved from "https://fantendo.fandom.com/wiki/Sonic_and_Megaman?oldid=2068102"
Community content is available under CC-BY-SA unless otherwise noted.