“Don't slow down if you want to stay ahead!”
— Tagline

Sonic Velocity (ソニックベロシティ Sonikkuberoshiti) is an upcoming 3D platformer video game in the Sonic the Hedgehog series, developed by Studio Lillie (t∣b∣c) and published by Sega for the Nintendo Switch, Pharo, Playstation 4, and Xbox One.

The game makes a large step away from previous games with a new formula in which speed is limited and must be earned through strategic movement and reflex. Although high speeds are still possible, a larger focus is put on maintaining momentum in order to progress throughout the levels.

The game is a 3D platformer like previous installments in the Sonic series, yet it contains many changes in terms of gameplay. Instead of boosts that give free speed boosts with little player interaction, Sonic must now build up speed by running for periods of time interrupted, especially downhill. A miles-per-hour meter is placed prominently at the corner of the screen to show the exact speed at which Sonic is moving. Some obstacles can only be overcome at high speeds; some boulders, for instance, require 40 MPH of speed in order to be destroyed. This means that the player must build up speed in order to progress.

Sonic controls tightly, able to move and jump with precision. When running on foot, however, he cannot exceed the speed of 50 MPH. In order to build up more speed, the player must roll into a ball. In this form, Sonic controls more like a car than a runner, making it harder to continue to build speed and go through the level. As in previous games, Sonic can go through enemies when in a ball, giving him more protection than on foot. He can also break through certain objects to reach hidden areas.

Ring count is more important than ever; once 50 rings have been collected, Sonic is able to make sharper and more precise turns in ball form. It also gives him the ability to Air Dash forward while in midair and maintain momentum. This is just one of his many moves; he retains the ability to Homing Attack, which costs some momentum unless at 50 rings, and he has a new Grinding move. If Sonic rolls into a strong enemy that would take multiple hits, he can grind against the enemy until it is defeated, giving a boost of speed.

Each Zone is split into three Acts. The first and second Acts are full levels, while the third is usually a single boss fight. Every Act is designed so that it can be done quickly with very little stopping; thus, the player, when taking the optimal path, could build up momentum the entire time, reaching incredible speeds. Various rewards are given for beating an Act quickly, collecting a lot of Rings, or freeing many Animals.

The main story is seen through the eyes of Sonic, as he tries to thwart the plans of Dr. Eggman and eventually those of Metal Sonic. The whole game is split into 10 different Zones, each with three acts; after each Zone, an intermission is unlocked that stars either Tails or Knuckles; it is optional and can be played at any time after unlocking it.

The story begins with with a monologue from Dr. Eggman to Metal Sonic about the Chaos Emeralds. He explains that there are two types of Chaos Power: biological, and mechanical. Sonic, Shadow, and others can use Chaos Control to draw power from the Emeralds, while his machines can generate endless friction to make electricity. Eggman reveals that he made Metal Sonic to obtain the Chaos Emeralds and then imitate biological life to make the ultimate use of the Emerald's power. He then sends Metal Sonic off to find the first of the hidden Emeralds.

Sonic manages to beat Metal Sonic, deactivating him temporarily. When he goes to check on the Chaos Emeralds, however, his presence causes them to awaken and fly away from the temple. The six that were in the temple are now spread throughout the world. The movement causes Metal Sonic to awaken, and it flies away in search of the Emeralds. Sonic decides to follow suit, leading to another chase. 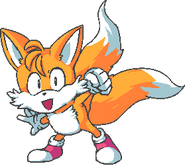 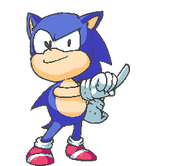 Sonic Velocity Logo
Add a photo to this gallery

This page was written by .lennongrad (t∣b∣c). Feel free to copy any code used on this article or the templates within; no permission needed! And make sure to have a good day :)
Retrieved from "https://fantendo.fandom.com/wiki/Sonic_Velocity?oldid=2432351"
Community content is available under CC-BY-SA unless otherwise noted.