Sonic 2014 film series is a collection of computer-animated fanfilms based on SEGA's uber-popular Sonic the Hedgehog video game series. TalixArts Jr. is the prinicpal studio developing the film series. Other studios like Sonic Team and Lone Planet Productions have contributed in making this universe. 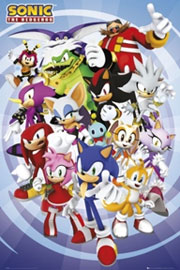 Sonic, a young blue hedgehog, lives a perfect and quiet life in his hometown of Spring Hills. However, he finds it under attack by an robot invasion. After stopping the robots, Sonic discovers they came from an maniacal evil genius—and unbeknownst to Sonic, his greatest enemy—Dr. Robotnik. When he discovers his hometown semi-destroyed and a close friend gone, Sonic sworn to get revenge. But a visit of an Watcher, Zugo the Eagle informs Sonic about seven mystical stones of power known collectively as the Chaos Emeralds. When Zugo tells him that the mastermind behind his homeland's attack is after them, Sonic realizes he must find the stones before Robotnik does. In order to stop Robotnik once and for all, Sonic embark on a vigorous quest while meeting allies, defeating threats, and trying to keep his emotions over what happened to his home in check.

A year after the first film, Sonic, Amy, and the remaining hedgehogs travel to Tails' homeland, Westside Island to create a new society. As Sonic tries to embrace his role as his clan's guardian, Knuckles seeks Sonic's help when they learn of the mysterious Master Emerald. Sonic and the others find out that the object controls the balance of the Centrum. When dark forces arrive, Sonic and the others try to stop the new threat, but when an ancient evil reawakens to seek the Master Emerald itself, Sonic learns of an ancient tribe of Echidnas that could unlock the key to save the Master Emerald and stop the evil that wants it. However, while Sonic ventures to find the tribe, he soon comes face to face with another hedgehog...one who has a dark past and personal vendetta against Sonic...his name is Shadow.

Months after Secrets of Shadow, Sonic is living his life as the guardian of Hedgehog Haven; his friends are living their lives and everything seems perfect until Sonic gets an invitation from Tikal, a old friend of Knuckles, who has the amulet Knuckles used to sacrifice himself to save the Master Emerald. She tells Sonic she can save Knuckles. Thrilled, things suddenly change when the amulet is stolen by a mysterious group of thieves led by Jet. As Sonic pursues them, Sonic realizes the only way to retrieve the amulet is to race them; so he seeks his old friends for help. However, Sonic has no idea, there's a much bigger plot exposed and Sonic will be surprised Dr. Robotnik is involved; and all events will lead Sonic one on one against a dangerous android who can do anything Sonic does.

A Hedgehog in Time

In the future of the corrupted city Morbius, a hedgehog with physic powers named Silver is on the hunt to stop the Deadly Six with the help from Blaze the Cat. As they try to stop them, they uncover a werehog creature, who looks like Sonic, has a devious connection to why the Deadly Six are taking over Morbius. To prevent Sonic from transforming into this creature, Silver goes back to the past to kill Sonic. But when they discover a hidden threat amongst them, Sonic and Silver must team up with the return of Shadow as they must prevent the future Silver saw...and prevent Sonic from actually causing it.

There are in talks that after Sonic 4, there will be standalone films. A couple of in production includes a Shadow film that will focused on Shadow's path to find himself anew and then there is a Silver the Hedgehog film in the works. A fifth Sonic film is in the works and is talks to be a two-part film. 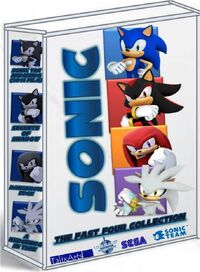 Retrieved from "https://fantendo.fandom.com/wiki/Sonic_2014_film_series?oldid=2038350"
Community content is available under CC-BY-SA unless otherwise noted.