Sonic's Mirror Realm is a video game by Power Paintbrush Productions. It was released on the 3DS and Nintendo 4D Viewer in mid 2017, and on the Wii U and Nintendo Switch later in the same year.

Some time after the events of Sonic Generations, Dr. Eggman came across a Magic Mirror, and walked through to discover a parallel dimension littered with Chaos Emeralds. In a top-secret mission, Sonic and Tails discovered this plot, and after telling Amy and Blaze about Eggman's plan, the four ran through the Mirror to stop Eggman once again.

Sonic's Mirror Realm has similar gameplay to Sonic Colours in the 3DS and Wii U Versions, whilst the gameplay is similar to Sonic Lost World in the 4D Viewer and Nintendo Switch Versions. In some acts, the player must either beat their opponent (may be another playable character or, in some fixed circumstances, a Metal Character) to the Finish Line, similarly to Sonic Rivals.

Each Zone has four Acts in the Handheld Versions and five Acts in the Home Console Versions, not counting boss fights. The acts themselves differ from version to version. 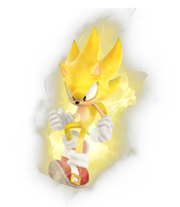 Seven Chaos Emeralds can be found in every stage in the game, not counting Boss Fights. Collecting all seven allows the player to enter Super State, granting them increased speed, invincibility and the ability to glide in mid-air by holding down the jump button. When racing a rival, your opponent may pick up Chaos Emeralds as well, but will drop an Emerald if you manage to Homing Attack them. Metal characters will never try and pick up Chaos Emeralds.

Exclusive to the Switch version, this online service allows you to race other players through preset stages or stages made by the community.

The gameplay is similar to that of the Sonic Simulator from Sonic Colours. The controls are shared with the main game. However, as well as a Rainbow Gauge, the player has a Ring Gauge, which goes up as you collect rings and is emptied if you get attacked. The more the Ring Gauge is filled, the faster you can move.

Each stage has three different courses. The exact layout of these courses differs between versions.

Allows you to create your own tracks. You can choose a theme for your track, draw out the terrain and add any enemies you want to include. Your tracks can be shared online and used in races.

Sonic and the Infinite Landscape

Exclusive to the 3DS version, this mode is an RPG where the player controls Sonic characters and must defeat enemies in battles whilst journeying various areas.

The player can choose a Party Leader and two other characters for their party, and must then give each Party Member a Buddy.

If a Buddy's class matches the class of whoever summoned them, the effect is enhanced. Each Buddy can only be summoned once per battle!

Used by Mage Class characters. You can obtain new spells by levelling up. Each spell requires a certain amount of MP to be used.

These special abilities take three turns to charge up, and each character class has a different Super Ability.

Exclusive to the 4D Viewer version, this mode is unlocked by collecting 10 Chaos Emeralds.

Some music tracks and courts must be unlocked by collecting Chaos Emeralds.

Swipe up and then down to serve. Swipe in any direction to swing the racquet. Move with the Circle Pad (you'll automatically move towards the ball if you don't move manually) and tap twice to use your Superstar Move, improving your next four shots. Collect Chaos Emerald Shards by returning the ball (you'll obtain up to three every time you return the ball) in order to fill the Superstar Gauge. You can initiate your Superstar Move once the gauge is completely full.

Exclusive to the Wii U version, the Fishing Minigame is unlocked after collecting 10 Chaos Emeralds in levels.

Up to eight players can play at once via online gameplay.

Use the Circle Pad to move the end of your fishing rod. Collect rings to add weights, allowing you to fish deeper into the lake. Once you catch a fish, you'll earn points. If you collect enough points, a rare fish will appear for you. The "King of the Pond" also appears in the lake, and the first player to catch him automatically wins the game. If no one catches the "King of the Pond" after 90 seconds, whoever has the most points wins.

The player can visit this area after completing Rainbow Hill Zone and Haunted Home Zone. Rings collected in stages can be used to buy merchandise here! Blue Rings do not count towards this value. Red Star Rings are equal to 100 normal rings. 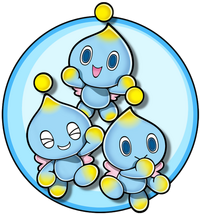 Chao can be raised at the Chao Garden. Each Chao egg hatches into a baby Chao, who will become a Chrysalis after a set period of time. The baby Chao will then become a Neutral Chao, Hero Chao or Dark Chao based on how they were treated, and will gain a sub-type based on their stats as a child.

Several courses are available for Chao to race in. Touch and hold the Chao on the Touch Screen (or hold down a certain button in the Switch Version) to increase the speed at which your Chao moves at the cost of Stamina. When the Stamina gauge empties, the Chao has to stop and rest to replenish the gauge.

Here, you can name your Chao, treat an unhealthy Chao, take your Chao to classes or buy items at the Black Market!

Bought at the Chao Black Market.

Retrieved from "https://fantendo.fandom.com/wiki/Sonic%27s_Mirror_Realm?oldid=2920473"
Community content is available under CC-BY-SA unless otherwise noted.