“I'm a shadow, one that no light will shine on. As long as you follow me, you will never see the day.”
— Solid Snake, Metal Gear Solid IV

Solid Snake, real name David, is the protagonist of stealth-action Metal Gear franchise. Solid Snake was created in 1972 as part of Les Enfants Terribles - a project funded by the United States government with the goal of creating a clone of world-renowned solider Big Boss. He was one of the three successful clones produced from this project, alongside Liquid Snake (who is treated as his twin brother), and Solidus Snake. Due to both the FOXDIE virus he carries and the fact that he is a clone Solid Snake ages at a much faster pace than normal humans do, appearing to be in his 70's throughout the events of Metal Gear Solid IV despite only being 42 or 43 years old.

Within the Metal Gear universe Solid Snake is a legend among military black ops, earning the nickname of "the Man Who Makes the Impossible Possible". In his teenage years Snake joined the military and inducted into the Green Berets. Later in his life Snake would go on to join Big Boss' special forces unit FOXHOUND, where he was given his code name. Solid Snake served as a member of FOXHOUND until 2005's Shadow Moses Incident, where he was tasked to take down his twin brother who, alongside members of FOXHOUND and the Next-Generation Special Forces, had taken over a nuclear weapons facility. After this incident Solid Snake disappeared from public view for years, as he had faked his death after learning the incident was a conspiracy concocted by the US government to have Snake become a carrier for FOXDIE, an artificial virus that causes specific individuals who contract the contagious disease to suffer a fatal heart attack. Following the Shadow Moses Incident, Solid Snake and his friend Hal "Otacon" Emmerich would go on to found a group named Philanthropy with the goal of eradicating the Metal Gear technology that was abused during said incident.

Solid Snake appears as one of the main characters of Super Mario and Friends: Zennu Quest. After Mario's disappearance during Princess Peach's party, he is one of the characters who goes out to locate him, working alongside Link, Mega Man, Sonic the Hedgehog, Miles "Tails" Prower, and Pikachu to achieve this.

Solid Snake appears as one of the many playable characters in Ultimate Showdown. Fitting to his Metal Gear origins Snake is of the Infiltrator class, meaning that his gameplay is based around stealthily moving around areas.

Solid Snake will make his third playable appearance in the series in Super Smash Bros. Galactic Battle. Much like fellow Konami rep, Simon Belmont in Ultimate, Snake has gained an echo fighter, being his brother and fellow clone, Liquid Snake. He has been confirmed to make an appearance in The Galactic Battle, but his role is unknown. For the first time in the series, Snake appears as a starting fighter.

Snake appears as a Solo Unit.

Snake appears as a playable character in Super Smash Bros. for the arcade. 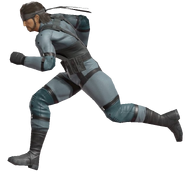 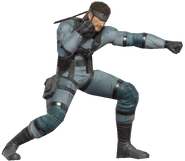 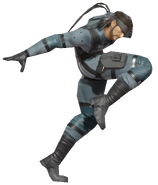 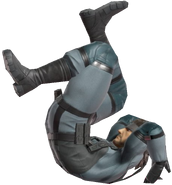 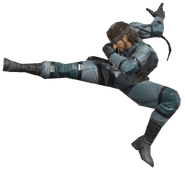 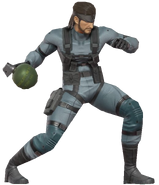 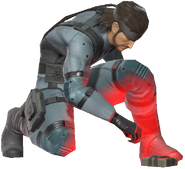 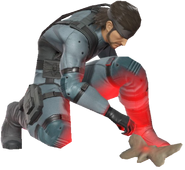 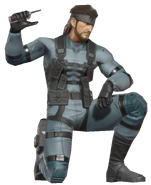 Add a photo to this gallery
Retrieved from "https://fantendo.fandom.com/wiki/Solid_Snake?oldid=3335650"
Community content is available under CC-BY-SA unless otherwise noted.