Solgaleo (Japanese: ソルガレオ Solgaleo) is a Psychic/Steel-type Legendary Pokémon, and represents the sun.

It evolves from Cosmoem starting at level 53 in Pokémon Sun and is one of Cosmog's final evolutions, the other being his counterpart Lunala.

It is the mascot Pokémon for Pokémon Sun and is able to enter the Radiant Sun phase.

Solgaleo is a vast white, leonine Pokémon with a blunt muzzle, blue nose and a navy, spacious visor-like area with pale blue eyes. Said area may show a sun icon when it attacks. a quartet of golden spikes is placed above its forehead, two more pairs are placed around its cheeks and eight large puffs of mane surround its face, giving it a remarkable resemblance to the sun. Five of these puffs are adorned with a yellow-orange tip and a red piece, while the three blank ones resemble a mustache and a beard.

The rest of its body seems a bit more metallic. It abdomen and hips are covered by a black plate, as are its toes and soles. Its ankles are rimmed with red rings. Black spots also mark its feet and its knees. It also has a white tail, tipped with black and gold.

Solgaleo has been honored as an emissary of the sun since ancient times. It has been respectfully known as "the beast that devoured the sun". Solgaleo's body carries a lot of energy around, shining with light when said energy is activated.

When Solgaleo enters the Radiant Sun phase, its white fur shines with light, and all black, red and gold parts on its body are endowed with a bright yellow light.

Solgaleo is based on a lion with a sun motif. The fact that its known as "the beast that devoured the sun" may be a reference to a common image representing alchemy: a green lion consuming the sun.

Solgaleo comes from sol and leo, Latin for sun and leo, respectively. It may also possibly come from Galileo, an Italian astronomer that proved that the Earth rotated around the sun. 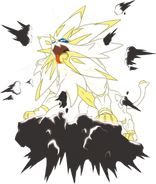 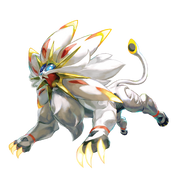 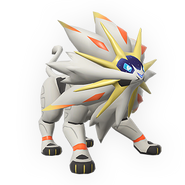