Start a Wiki
“Somebody! Give me some tissues! It’s not that I need to go to the bathroom or anything, but a lump of snow just fell from the ceiling, and I’ve become a big snowman! Now my nose is running like crazy! What’ll Nintendo do if their BIG STAR gets a cold?!”
— Wario, Wario Land 4
Snowman Wario is one of Wario's Reactions in the Wario Land series. It was introduced in Wario Land 3 and returned in Wario Land 4 and Wario Land: Shake It!!.

Wario needs have a bunch of snowdrift fall onto his head in order to turn into Snowman Wario. He then becomes covered in snow and his mobility is severely limited, taking away his running and usually his jumping capabilities (he can only jump in Wario Land: Shake It!!). However, any enemy Wario runs into dies on contact and stepping on a slope will cause him to roll foward, gaining mass from the snow underneath. Rolling into Snowman Blocks allows him to destroy them. At peak mass, he can break Dark Purple Snowman Blocks.

This form has not appeared in any known fangames. 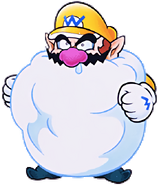 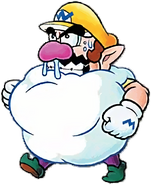 Retrieved from "https://fantendo.fandom.com/wiki/Snowman_Wario?oldid=3120439"
Community content is available under CC-BY-SA unless otherwise noted.