Snow Spikes are a sub-species of Spikes, first appearing in New Super Mario Bros., only found in World 5-1, though they also appear in Paper Mario: Sticker Star found in the first two levels of World 4. Their visual appearance includes a cyan body, snow goggles, and orange snow boots, hat and gloves. Their attack pattern is similar to a Spike, but they throw snowballs rather than spiked balls. These snowballs can roll through the snow, and gradually grow bigger until they are destroyed.

Snow Spike appears playable in Super Mario MHL. Its special move is Snowball Smash (it throws snowballs at other players).

Snow Spikes make their debut in the Mario & Luigi series, appearing Mario & Luigi: Sage Quest as enemies fought in Bittercold Isle, though they also appear in the audience of Bittercold Tent's Circus Battle Waves. Snow Spikes, in battle, will attack by throwing snowballs at Mario and Luigi, which must be dodged with Jump. They can also roll the snowball on the ground at a bro, which must be destroyed with a Hammer, and can waste a turn to create a Mr. Blizzard. In the overworld, they can be seen belly-sliding across icy surfaces, though on normal ground they will throw snowballs at the bros. 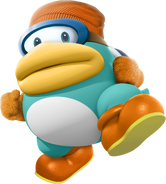 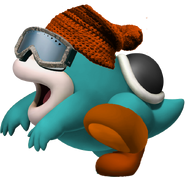 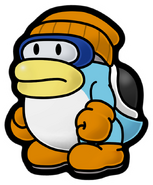 Snow Spike artwork in Paper Mario: The Stones of Old.
Add a photo to this gallery
Retrieved from "https://fantendo.fandom.com/wiki/Snow_Spike?oldid=2772507"
Community content is available under CC-BY-SA unless otherwise noted.