It evolves from Munchlax when leveled up with high friendship.

In the Generation I and II games and their remakes, wild Snorlax can be found sleeping in inconvenient locations throughout Kanto. In order to catch one, a Trainer must first awaken it with music from either a Poké Flute or Pokégear set to the Poké Flute channel. A sleeping Snorlax makes a return in Pokémon X and Y, in which it is blocking the player's way on Route 7.

Snorlax is a huge, bipedal, dark blue-green Pokémon with a cream-colored face, belly, and feet. Its body is composed of mostly its belly, where most of its fat reserves accumulate. Its head is large, with small, pointed ears and two pointed teeth protruding from its lower jaw. It has large, hind feet with three claws and a circular brown paw pad, and its arms and five foreclaws are short. Snorlax is often found in mountains and forests. It wakes up only to eat and seldom for exercises. It is not a picky eater, as its strong stomach allows it to eat even moldy food without feeling any ill effects. When hungry, it is not satisfied until it consumes 900 pounds of food. Snorlax is docile enough to let children and small Pokémon bounce on its large stomach.

Probably one of the laziest Pokémon ever. It can eat practically anything, and rarely ever gets sick. Even the poison of a Muk or Sevassassin doesn't seem to faze Snorlax much.

Tess, Blobeeder, and other fat fetishists dream of being this Pokémon, failing to recognize that Mega Evolution is only a temporary state and that they often die young achieving this dream.

Imagine being so lazy that an entire functioning forest ecosystem, that other Pokémon are capable of living in, has grown on your belly, and yet you're still alive! 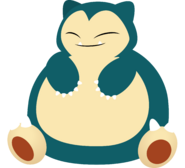 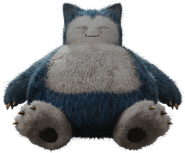 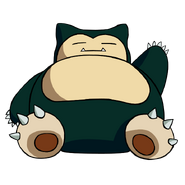