Snivy is a bipedal, reptilian Pokémon with a slender build. Most of its body is green with a cream underside. A yellow stripe runs down the length of its back and tail, and it has yellow markings around its large eyes. Two curved yellow structures that resemble leaves or small wings protrude from its shoulders and bend backwards. Its slender arms have three fingers, while its tiny feet have no digits whatsoever. It has a large, palmate leaf with three prongs on the end of its tail. This tail is capable of performing photosynthesis, which allows Snivy to move more quickly. However, the tail will begin to droop when Snivy loses energy. This Pokémon has a calm, collected demeanor.

Snivy appears as an unlockable character in Super Smash Bros. Kombat. In this game, Snivy is identified as a male middleweight fighter. To unlock Snivy, the player must beat his World of Smash story or beat Classic Mode on Hard difficulty with three lives without using any continues.

Snivy appears as an unlockable character in Super Smash Bros. Endgame. In this game, Snivy is identified as a female middleweight fighter. 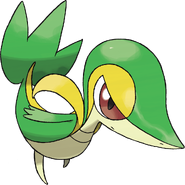 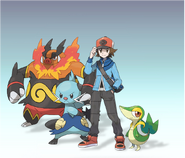 Snivy and his trainer in Super Smash Bros. Rampage. 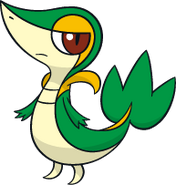 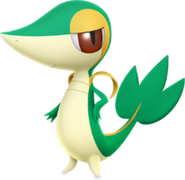 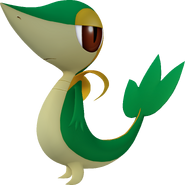 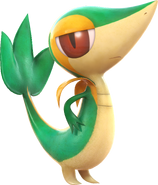 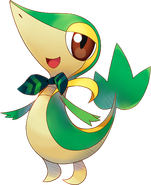