Snifits are a sub-species of Shy Guys and are a somewhat frequent enemy in many Mario titles that debut in Super Mario Bros. 2 (or Yume Kōjō: Doki Doki Panic outside of western regions). Snifits differentiates themselves from normal Shy Guys for wearing black masks that have an extended nozzle for a mouth, similar to a gas mask, which allows them to shoot metallic balls from their mouth as projectiles and as means of attacking. There are red Snifits that are the most commonly seen color variants in the Mario franchise, but gray, green, blue, black, purple, pink, and yellow variants appear as well. They originally worked for Wart in Subcon, but in the Mushroom Kingdom, they work for Bowser, being members of the Koopa Troop.

They have many derived species; some examples being Snufits which are floating, ghost-like Snifits that are related to Boo Guys, Propeller Mūchos which are similar to Fly Guys; they have propellers on their heads that allow them to fly, Ice Snifits that wear eskimo parkas, shoot out snowballs and ice chunks, Spiky Snifits are cacti-like Snifits that shoot small spiked balls, Laser Snifits (who in reality are Beanish researchers in Woohoo Hooniversity transformed by Cackletta) that shoot rings of laser energy, Gunner Guys that shoot bullets or cannonballs, Scorchits that shoot fireballs, Snifaros that are covered by a floating sarcophagus, and many more.

While Snifits are mostly enemies in many Mario titles following their debut, there are also some friendly/neutral-aligned Snifits; some examples are the Snifit Patrol, a Snifit police force in the board Space Land from Mario Party 2, that sets up a speed trap by any player when they come across a unit standing by for a few coins, a Snifit from Mario Party Advance, and a Snifit who hosts a game show called Snifit or Whiffit in Stump Glade during the events of Paper Mario: Sticker Star and its "Seabed Edition" in Cobalt Base during the events of Paper Mario: Color Splash.

Alongside other derived species, normal Snifits finally make an appearance in the Mario & Luigi series, debuting in Mario & Luigi: Sage Quest. Ice Snifits from Mario & Luigi: Superstar Saga / Mario & Luigi: Superstar Saga + Bowser's Minions reappear, and Snufits make their debut in this game. Normal Snifits appear in Plumdrop Rainforest, where they are battled alongside Poison Bloopers, Spear Guys, Scuttlebugs and Fuzzies. In battle, they fire small, black bullets at Mario, Luigi and their partner; if two Snifits are in battle, each one will fire at two characters simultaneously. They can also jump while firing, in which the characters must stay still or else they will take damage. Alternatively, Snifits will briefly squib fire; taking a second to fire, but instead of firing a bullet, they fire a slow-moving metal ball that rolls along the ground, which deals more damage, is harder to dodge, and can trip a character. 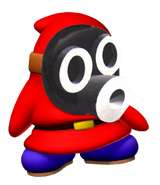 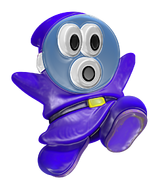 Super Fighting World as an enemy 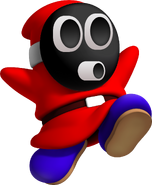 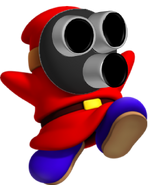 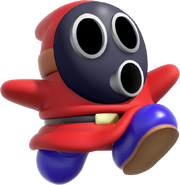 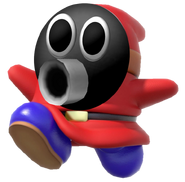 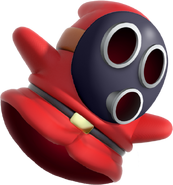 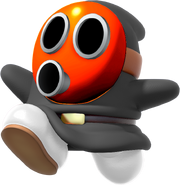