Fantendo - Game Ideas & More
Register
Don't have an account?
Sign In
Advertisement
in: Characters, What is the New Fantendoverse?, Males,
and 4 more

Snaily Joe is a politician snail that is the latest in the long line of political candidates that Richard Independence has been up against. He made his first canonical appearance in the episode "Xerox" of Fantendo Now. He later appeared in a major role in the episode "One Snail Over All".

Snaily Joe is an electric blue snail, often with a turbo-charged shell that allows him to propel much faster than he would normally be able to, but has on occassion worn shells with the flag of America imprinted on it or a black shell and tie. He has cherry red eyes and a winning smile.

Snaily Joe is bombastic and energized about his own campaign, however this charmisa hides the fact he has very little stance on actual policies. He emphasizes "democracy", in his campaign, to the point where he makes the word his slogan ("Democracy!"). This approach suggests that he is only running to oppose Richard Independence to get him out of office after being in there for so long (around two hundred and forty or so years).

He has stated that he would instate term limits once in office, although considering how well Richard Independence has taken care of the country as of late, this is seen as a somewhat controversial move and thus isn't brought up much. He loves his human wife Terra Joe, who is the only one who can get him to change his views sometimes. He has a secret hobby for painting, but is not very good at it.

Snaily Joe comes from a long line of political opponents that have been trying to get Richard Independence out of office for a while. His father, Froggy Joe, proceeded him before, and while Snaily Joe never really had a interest in politics, he was named as Froggy's heir when Froggy died of a heart attack. Since then, he has been more or less bumbling his way through politics. This election year though, he has a winning strategy that will finally make his family proud...

Snaily Joe is a snail, so he can create thick slime in his wake and wear various shells that he can hide inside. His shells are bullet and fire proof, and are packed with emergency preparedness kits. He is weak to salt.

His political opponent, but beyond politics they are actually somewhat good friends. This is likely because Snaily Joe doesn't really have any hard political opinions. 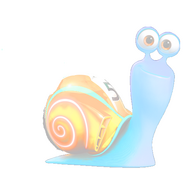 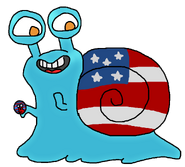 Snaily Joe as he appears in One Snail Over All
Community content is available under CC-BY-SA unless otherwise noted.
Advertisement