Fantendo - Game Ideas & More
Register
Don't have an account?
Sign In
Advertisement
in: Free to use Characters, Characters, What is the New Fantendoverse?,
and 9 more

You may be looking for the original.

Smile is the main and titular character of the GHOST SMILE series. Smile is a ghostborn, which means he was born as a ghost. Yearning for true life since birth and feeling out of place due to his rare status, he embarked on a quest to retrieve the Crystal of Shadows, an artifact that would grant life to a ghost.

Although he successfully earned it and had a taste of life, two big adventures irreperably changed him, becoming the embodiment of Order following the original's death at the hands of Chaos. Now a lone wolf and tragically a ghost eternally, he protects the multiverse from threats as he travels alongside his constant companions: the Spirits. Reception for the character has been pretty positive.

Smile was "born" in an unknown time in the Spirit Universe, the son of two ghosts as all ghostborns are. As he grew, Smile felt out of place, having never have been a human. He took comfort in books, staying away from other ghosts. From the books he learned about life and sought for a way to become a human.

Smile is a fairly nice guy who keeps to himself and is not a big fan of social interaction, preferring to read a book. Due to his status as a Ghostborn, it made him relatively unsocial. Despite this, he tries to help people when he can, but has his limits, such as when the Spirit Council forced him to help and will snap if pestered enough.

Following GHOST SMILE II, Smile becomes much more experienced and mature, having been changed by his travels. Despite this, he still retains his good nature and antisocial personality. After Spooky Spirits, he decides to become a hero for those in need.

Smile is a tall and relatively large ghost who has a blob/sludge like appearance with neon green eyes and a neon green mouth.

Smile is a tall skinny human with long dark hair and green eyes.

Smile has stretchy appendages which he can use in melee combat, something he is quite skilled at, and can morph his elastic appendages into various shapes. He can also possess certain creatures, just like other ghosts, and summon various Spirits who each have their own unique abilities.

Smile as done by PixelManga.

Smile as done by Yami no Tenshi. 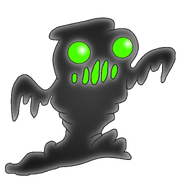 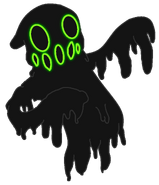 Smile, as done by Randomfrog. 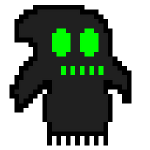 Smile as he appears in Super Mario Maker, done by Sr.Wario.
FU-Smile.png
Smile's art in Fantendo Uprising, done by Trucky.

Smile, as done by .Kursivdruck. 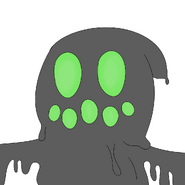 Smile, as done by Qyzxf.