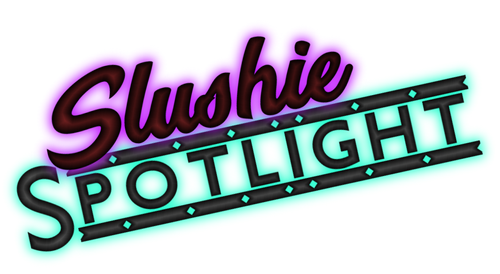 Slushie Spotlight is an umbrella game created by Candy Dynamics released on PlayStation 4, Xbox One, Nintendo Switch, and Steam. The game is a follow up to a cancelled previous umbrella game, Slushie Player, and carries over some mechanics and ideas that were planned to be used in that game.

Slushie Spotlight is a two-dimensional fighter with some unique gameplay aspects. The game uses directional inputs for special and aerial attacks similar to the Super Smash Bros. series, but, unlike that series, the goal of a battle is not to defeat your opponent by knocking them off-screen but to collect Slushie Points, which are dropped when fighters either use their attacks or are hit by attacks. Each fighter starts with an equal amount of Slushie Points unless a handicap is applied, and there are five different colors of Slushie Points, Red, Blue, Violet, Green, and Gold, and all of the amounts of each color for a fighter are visible at the bottom of the screen with meters represented by cups. The first four colors correspond to each fighter's special attacks. When fighters use a special attack or are hit by one from an opponent, they will drop Slushie Points of the corresponding color. Using normal or aerial attacks will cause fighters to drop an equivalent amount of Slushie Points from each of the four standard color varieties unless they have none left. Obtaining more Slushie Points for a color will also increase the power of the attack it corresponds to, but the fighters in the lead will always be more susceptible to dropping Slushie Points. Unlike the other four colors, the Gold Slushie Points will always start at zero and corresponds to the fighter's most powerful attack known as their "Final Slush." The gold Slushie Point meter can only increase and cannot be depleted except through using the Final Slush, but gold Slushie Points will drop at random when attacking. A Final Slush can only be used when the gold Slushie Point meter is full.

There are two main game modes which are known as Perfect Slush and Ratio Slush respectively. In Perfect Slush, the goal of a battle is to have the most Slushie Points of all fighters by the end of the match, while in Ratio Slush, the goal is to be the closest to having a perfect ratio of Slushie Points with each Slushie Point meter (excluding the gold point meter) half full by the end. Players can set the timer before a match and add any additional restrictions or rules, and Final Slushes can also be turned off.

Following the end of Spider-Man: Into the Spider-Verse, Wilson Fisk, in prison, contacts his associates to discuss creating a new, more powerful version of the Super Collider.

Retrieved from "https://fantendo.fandom.com/wiki/Slushie_Spotlight?oldid=2994920"
Community content is available under CC-BY-SA unless otherwise noted.