Slippy Toad is a childhood friend of Fox McCloud, and the young and intelligent inventor for the Star Fox Team. He is the father of Beltino Toad, who is the director of research for the cornerian research system.

Slippy is often shown to be a very bad pilot and a lot more inexperienced than the rest of the team. He is constantly teased by his own teammate, Falco Lombardi, and for an unknown reason Starfwolf team member Andrew Oikonny seems to target him when they meet in battle all though there is no known history between the two.

His inventions have been varied, they included a translator for the dinosaurs on Sauria, the Dinosaur Planet and a disguise so he could look like the Sharpclaw also used on Sauria. He also invented the robot ROB 64 who usually stays behind on the Great Fox while the other team mates leave.

Slippy is often shown to have the ability to analyse enemies sheilds and defences, he doesn't have a blueprint of some of the mechanical foes so it is assumed that his knowledge of technology is great enough that he can look at it and know it's weak spots.

He eventually settles down and marries another frog like him, Amanda, and they have many children, one of which is to join the future Star Fox team. Led by Marcus McCloud, Falco rejoins and Lucy Hare's daughter joins the crew too! 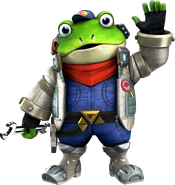 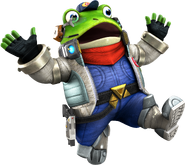 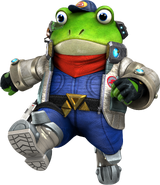 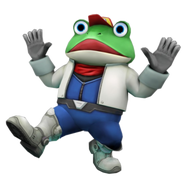 Add a photo to this gallery
Retrieved from "https://fantendo.fandom.com/wiki/Slippy_Toad?oldid=2968575"
Community content is available under CC-BY-SA unless otherwise noted.