Fantendo - Game Ideas & More
Register
Don't have an account?
Sign In
Advertisement
in: Free to use Characters, What is the New Fantendoverse?, Males,
and 10 more

A immortal shrimp, Skimp the Shrimp is named after his first phrase that he spoke through Yung Bae. He and his Standing Ripple have a symbiotic relationship that allows for more control and him to speak. Yung Bae's abilities allow him to sample molecules from other beings and objects and create new creations from the cloned parts. Yung Bae also allows him to target those in love, able to see dopamine and Oxycontin similar to heat signatures.

Skimp the Shrimp is an orange shrimp, a tad larger than your average shrimp.

A green skinned, feminine Standing Ripple with white hair with blue and purple patterns etched across it. Two purple beads are placed in her hair as part of the left and right strands next to her face. She wears white sunglasses with pink lenses. She wears a pink one-piece swimsuit with yellow patterns, and has grid-based bands around her legs. She wears golden bands around her elbows. She also wears bulky blue boots.

Skimp the Shrimp is an cruel, demented personality trapped in the body of a shrimp. Haven been treated as a joke since his birth and inception, his owner used him as a lab experiment to test the effects of Ripplite. This made him both immortal and gain the Standing Ripple Yung Bae. Testing his Standing Ripple's strength, he killed his owner and sent his lab into a blazing inferno. He and Yung Bae would later leave for the sea. After living on a boat for a year, they were found by Hammerhead, the boss of the Ocean 11 gang and joined him, wanting to know more about this strange power he possessed.

Skimp is manipulative and is well aware of the patterns of the typical human and uses it to his advantage. He enjoys killing and does not care about money, instead only caring about power. He resents not being taken seriously and is quick to correct anyone who dares to laugh at him. Having a symbiotic relationship with Yung Bae, he is able to speak through her and control her directly when placed into her mouth. This kind of relationship is unusual and shows the kind of intellect that Skimp is capable of.

Yung Bae is a interesting Standing Ripple as she actually has a personality and relationship with their user. Yung Bae resents being part of Skimp's actions, yet cannot disobey him due to it being his fighting spirit. Skimp is able to talk though Yung Bae as well as control her actions when placed into her mouth. This difference between the two perhaps suggests that Skimp's morality was completely transferred into Yung Bae.

Skimp the Shrimp's powers and abilities come mostly from his Standing Ripple, Yung Bae. Yung Bae allows Skimp to "sample" molecules from both living and inanimate beings, able to construct monsters from the material he has sampled. Not only this, but he is able to sample this material onto himself. There is some limits to this power however- Skimp is not able to keep a stable creation and is limited to the material he has to work with- he cannot modify molecules when he samples them, only able to combine them. However, this ability is rightfully feared, as Skimp is very familiar with his own power at this point.

Yung Bae can also allow Skimp to see through her eyes- and he can see dopamine and Oxycontin, chemicals released by the brain when a person is in love, similar to a heat signature and can see it through walls. This allows him to track love-stricken opponents- of which he tends to find a lot of as many find his Standing Ripple, Yung Bae, attractive.

Skimp is also able to assume direct control and speak through Yung Bae when placed into her mouth. This symbiosis is unusual for a user and their Standing Ripple. 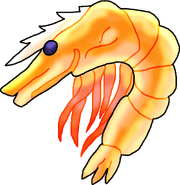