Fantendo - Game Ideas & More
Register
Don't have an account?
Sign In
Advertisement
in: Characters, What is the New Fantendoverse?, Original Characters,
and 6 more

??? "Sketch" Villiar from is the main protagonist of the Paintverse series, where he wields ancient relic named "The Paintbrush of All Souls" that allows him to use magical paint as a weapon.

Sketch is a hyperactive boy, always anxious for adventure and energetic, as well as constantly optimistic, he's not the brightest so he can often run into danger straight ahead and get his ass kicked, and he's also very passionate about being the hero of Paintverse, so sometimes he'll get into fights he can't win just to defend his pride.

Sketch knows that everyone puts their hopes on him and depend on him in order to protect the planet, which is why he can be often under stress because of the high pressure put on him, but he always tries to live up to his title no matter what.

Sketch's actual name isn't Sketch, that's just a nickname that he goes by as he claims to dislike his real name, since that's the name he uses throughout the Paintverse games, the Artizzians use Sketch to refer to him at all times, not even knowing that it's a nickname.

Taking place 4 years before the events of Fantendo Genesis, a 14-year old Sketch was brought into Paintverse against his will after the death of a member of an insurgence against the tyrannical Lord Spightmare and his army of demons, who ruled over Paintverse with an iron fist. After that, Sketch befriended the leader of the rebellion who was trapped inside of The Paintbrush of All Souls, "Pincelle", and through their synchronization they managed to wield the artifact in order to become the saviors of the Kingdom of Krayllion.

In general, Sketch looks like a boy with very pale skin, however, his clothes have been different in the first two games of the Paintverse series, and the creator says that he plans Sketch to have different clothes in every future major appearance if possible.

Sketch wears a purple-ish cap saying C, a light blue shirt with scrawl representing the rainbow in the middle of it, blue jeans and brown shoes.

Paintverse - Into the Spirit Realm

In this installment, Sketch has no cap and wears a short-sleeved black jacket with a long-sleeved yellow shirt below it, blue jeans and a rainbow-coloured hankerchief on his neck. He also wears purple shoes with lightning symbols on each side of them.

Sketch's main ability is his link with the SoulBrush after wielding it in the first game, he can wield it as a sword and/or use it to fire projectile Paint, which comes in a variety of different elements, each with their own advantages. Sketch's link with this artifact allows him to fire it and change its element no matter how far apart he is from it.

Sketch gains the ability to summon, communicate, and to a certain extent control spirits from the Spirit Realm in the second installment in the series, by "to a certain extent control them", we mean that they're not really under Sketch's control, as that's forbidden, this means that when Sketch gives them an order or suggestion they might refuse, unless it's to protect him or help him, as he's the only person that can directly communicate with them. If Sketch were to order the spirits to do something they consider evil they will most likely turn on him given the chance.

Spirits can morph their bodies into various shapes, this gives them many possible uses in combat, such as releasing a swarm of them to block the opponent's vision or spawning a giant fanged one to bite at the opponent, as well as common everyday uses such as carrying things around and stretching themselves out to act as a grappling hook of sorts.

However, if Sketch spawns way too many Spirits at once or in a short span of time he will need to wait some time before he can spawn any more, not only that but Spirits are pretty weak physically, a good hit can be enough to "poof" them back to the Spirit Realm, where they will have to wait a while before being able to be summoned again. 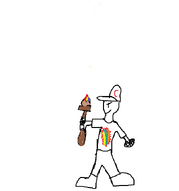 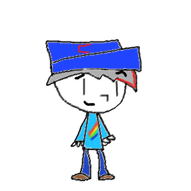 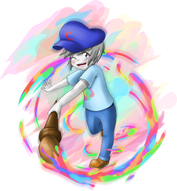 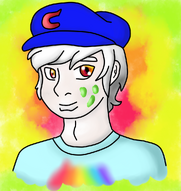 Sketch, as he appears in Fantendo Smash Bros. Orchid 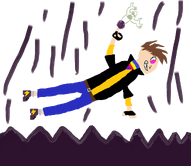