The Silver Star is a collectible item and one of Mario's Power-Ups in the Super Mario series of games. Its purpose differs in each game. It debuted in Super Mario 64 DS, where Mario and the other playable characters had to collect 5 Silver Stars in certain missions in order to earn a Power Star. Its appearance is that of a Power Star but with a silver tint.

In Super Mario Finale, Silver Stars have a new use. Rather than being collected to earn a Power Star, they are used as power-ups akin to a Super Star. After being collected, they put Mario into a "supercharged" state, where his power-up abilities are even stronger. For instance, if Mario had a Fire Flower before collecting the Silver Star, he will then gain the ability to swim through lava and throw bigger fireballs.

Silver Stars usually only last a set amount of time, but there are some areas where the Silver Star abilities are required and thus where the power lasts indefinitely until Mario succeeds at the objective or leaves the area. Otherwise, when collected or obtained from a Silver Star amiibo, the boosted abilities last 10 or so seconds. 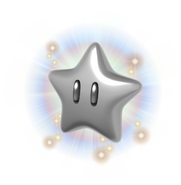 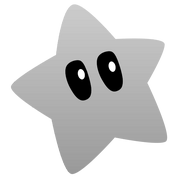 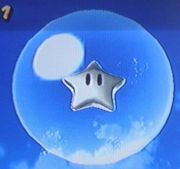