Fantendo - Game Ideas & More
Register
Don't have an account?
Sign In
Advertisement
in: Characters, What is the New Fantendoverse?, Fantendo Smash Bros. Nil,
and 21 more

View source
“Truth be told, I can't figure out why she believes she's the one the prophecy is talking about. She's neither blue or a beorn. So why is she running around like she's the hero of this story?”
— Zerita on Sia.

Sia is a new character in That One Series With a Long and Uninteresting Name That I Do Not Wish to Remember, designed and created by Exotoro. She first appears in Underground (2014), where she is a secondary antagonist alongside Netnu and Boare. She has been described as a towering woman who believes she was the "chosen one" to stop Doomulus Grime, even though the prophecy matched Unten's description. She has wicked fast reflexes and is a better hero than Unten is at the start of the game, but this doesn't truly discourage him.

She wields a sword called the Palm Cutter, which is meant primarily for cutting down Palm Trees, but she has customized it to be sharper and faster, as well as giving the blade itself a unique design.

She left at the end of Underground (2014), still seeking for a planet that would welcome her as a hero.

Sia grew up in the high class society of the Five-Tail Society on Zeon, and often found herself bored with her high-class life and wanted to adventure, but her parents (Siandra and Sion), who expected her to carry on their legacy, did not allow her to stretch her legs and explore outside the district. As Sia grew up, Sia ran from home and began to adventure on her own. Searching for her purpose, Sia seemingly found it on Chief Dongorio's Stone of Prophecy, which foretold of a blue beorn that would take down a mighty but corrupt empire.

Sia is a Siandrall, a species that is one of the few on Zeon not to be heavily nomadic. Despite this, Sia yearns for adventure and wants to be a hero. Because of this, Sia tends to butt in on things like prophecies she's not apart of or breaking "NPC Quests". Because she is so strong, tall, and fast, many things that would slow down a normal hero are not an issue with her. A treasure chest on a high perch? Sia can grab it with ease. Broken bridge? Sia merely steps over the gap. Boarded up passage way? Sia has a sword specifically made for cutting wood.

Despite this, Sia does have her limits and some things she just can't do, like fit reasonably into a vent or enter a lot of doors without crawling/crouching. She also has a hard time following directions, as she is so used to breaking them. Sia does not wear any shoes as she sees it part of her arrogant culture, which she is desperate to break away from.

Sia also loves wearing scarves and makes her own. She likes them as they emphasize her height and finds them stylish. Sia loves being helpful and wants to emphasize how much she isn't like her own race, which has a reputation of being arrogant and elitist towards every other race. She also loves mediating and spends hours doing so. Sia is eager to make friends but is inherently off-putting to so many people that she finds it somewhat difficult to do so. Despite this, Sia does not let herself get down about it.

Sia appears in Underground (2014) as a secondary antagonist of sorts; while never truly against Unten, her goals and motivations are at conflict with Unten's. During the last act of the game, Unten realizes that they all need to work together to defeat Grime, as opposed to just one person. Sia participates in taking down Grime in the 6-1 battle. During this, Sia realizes she doesn't really have a place in the prophecy she tried to be part of and leaves with Boare, leaving Unten behind a scarf. This scarf later appears in the final game of the Prodigy trilogy as part of Unten's outfit.

Will be playable and a part of the story. Other information is unknown.

Sia appears as DLC for this game, and is part of Pack 2. It's unknown what she plays like. Due to a loophole, she was able to get in along with Leah Needlenam and Reptflux, even though DLC only permits two characters per creator.

Appears as a DLC character in the Fantendo Dimensions Resort expansion. Her appearance is non-canon, as this version of Sia is actually from a different but identical universe, brought in by Zellen Harley Quimbleson.

Sia is incredibly tall and is incredibly fast because of it. It extends to her reflexes as well, which can go off in a split second with nary any time for Sia to react properly. Sia is also very strong and could send someone like Unten flying with a single well-timed punch. Sia can also reach things that are ten and a half feet off the ground easily. She has absurd reach in a battle, which gives her quite the edge.

Siandralls as a race have the ability to read Runes of the Primordial, which are scattered across the galaxy. Sia also utilizes a sword called The Palm Cutter, which she has customized for exclusively her grip and maximum sharpness. As the Palm Cutter was created for cutting down palm trees, she can take out a grove of palm trees in a single swing and then carve the wood into planks herself, creating a living situation in a manner of days. 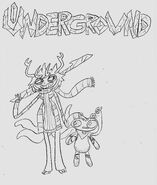 Concept art of Sia, who towers over Unten in this art.

Sia in Boare: Savior of Xellantran.

Sia and her four clones