Shuckle, known in Japanese as ツボツボ (Tsubotsubo) is a Bug/Rock Pokémon. It isn't known to evolve yet.

Shuckle seems to resemble some kind of turtle. It has a yellow body inside a red, jar-like shell with eight holes. Each hole has a cream-colored, thick rim. Shuckle's shell aslo seems to have a few small spots scattered around its shell, one being placed at the edge of the rim of the hole where its head comes out.

Its feet seem to have a gastropod-like shape, looking a bit limp.

It is presumed that its body is very soft, which is a possible reason why it is encased in a shell.

Shuckle may have the highest defensive stats of all the existing Pokémon, having for both physical Defense and Special Defense base stats of 230. The rest of his stats, however, are incredibly low, with its Speed being the lowest.

Shuckle are able to convert normal Berries they're holding over time to Berry Juice.

This Pokémon doesn't hunt or forage for feeding itself. Instead, it collects all kind of Berries and stores them in its shell, which will convert into drinkable matter by the Shuckle's digestive juices, which Shuckle could consume. It uses its digestive juices to dissolve rocks as well.

Shuckle can live in rocky areas and forests. They tend to hide under rocks and fallen logs for long periods of time.

Shuckle usually consumes Berries, which it stores in its shell. It also consumes the Berry Juice it produces.

Shuckle may have been based on an endolith, an organism that lives inside porous rocks or animal shells. Fungi (an alternate name for mold) are common endoliths, which is why Shuckle is also known as the Mold Pokémon.

Appearance-wise, it may have been based on a (land) turtle, also known as a tortoise.

Shuckle is possibly a combination of shuck (a husk or pod) and wither barnacle or turtle. 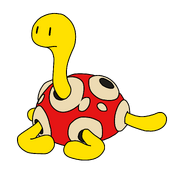 Pokémon Citrine and Olivine Versions
Add a photo to this gallery
Retrieved from "https://fantendo.fandom.com/wiki/Shuckle?oldid=2166566"
Community content is available under CC-BY-SA unless otherwise noted.