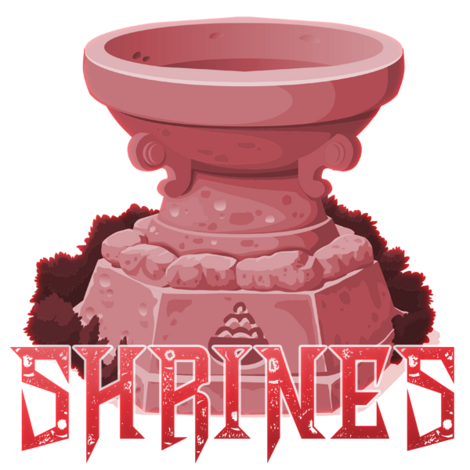 Shrines is a hack and slash fighting video game created by Illusion Works to be released exclusively to the Pacifico. Shrines is the spiritual successor to The Temple of Dreams, and serves as the rebirth of the series in a more directed vision than the previous game had. However, it should not be confused with the series remake, The Temple of Paradise, which holds more of the features of the previous games. It is set to be released sometime in 2016, or possibly 2017.

The main musical theme for the game is I Went Too Far (MK Remix) by AURORA.

The game is set in a corrupted future. A group of renegades took over the government, and caused chaos on the island of Ociport. To ensure control over the island, all across the island there were guardians set in place that will wipe out anyone who refuses to listen to the renegades.

After becoming extremely tired of this, a group was assembled to try and demolish the renegades and guardians one by one. This group, while trying to be discrete, quickly became known as the Shrine by other supporters.

Shrines plays similarly to the likes of Final Fantasy, Hyrule Warriors, and Bayonetta. As one of the characters in the roster, you can travel through a large expansive world. There are many different places to explore and visit, as well as fight. At the end of each level, there is at least one boss. After defeating a certain number of enemies and progressing through the level's story, you will be able to fight the boss who will appear somewhere on the map.

Each boss has different ways to defeat them, which makes every boss fight a new experience. Some may be as simple as just attacking them at a certain place on the map or on their body, but others may require you to have certain weapons and capabilities which you may not have.

All characters have a level, which will determine how powerful they are in combat. You can boost a character's level through either defeating enemies and bosses, or through special items known as XP Boosters, which come in small, medium, and large sizes. Weapons also have levels in the game, which can be levelled up through the same methods.

Field Conditions are extra conditions that may be on a stage. For example, some stages may have water on them, which is a field condition, which may slow down enemies or possibly drown them if they're small. There are many different field conditions, you can find a list of them here.

Here are the game modes for Shrines.

Like other games of the same genre, Shrines has a cinematic story mode. The story of Shrines follows Syron on her adventure to recruit other people to eventually form the Shrine group, and to bring an end to the reign of terror caused by a group of renegades.

Arena is a mode which unlocks upon completion of the game. In Arena, you are locked inside an arena and forced to fight as many enemies and bosses as you possibly can until you die. Reaching certain milestones in Arena will unlock new content in the game, such as skins or new characters.

Online is the second main mode in the game, which is unlocked upon completion of the first mission of the game. In Online, you can play against strangers or friends in order to become the best Shrine you possibly can. You can use any character in online, as well as any DLC that may have been released.

There is a leader board in Online which shows some of the best players in the world, as well as their rank and your rank. You receive rewards based on your performance in online, such as free DLC passes or other characters or items which may be limited or special.

Practice is a mode where you can learn how to use different moves for different characters. It will easily show you how to use and activate specific moves you may be having trouble with, hopefully making it easier for you to learn that move to use in future fights.

Here is the entire playable roster for Shrines. You can also see how to unlock each character in the table below.

There are over 40 planned characters to play as in the game, with DLC a possibility if the game sells reasonably well. Characters are unlocked through various different methods, such as completing story mode chapters or playing as a certain character enough times in freeplay.

Reception for the game is neutral. 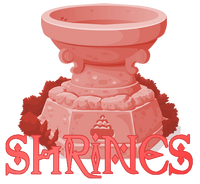 The basic logo.
Add a photo to this gallery

Here are all the characters in the game.

Retrieved from "https://fantendo.fandom.com/wiki/Shrines?oldid=3012565"
Community content is available under CC-BY-SA unless otherwise noted.