Shotzo is a regular enemy in the Kirby series. Like Gordo, Shotzos are invincible and cannot be defeated (only under special circumstances, such as dropping one into a pit). Shotzos have appeared in almost every game in the main series and some spin-off titles.

Shotzo is a small black cannon that fires spherical bullets (buttons in Kirby's Epic Yarn). It has leg-like structures attached to it despite being mostly immobile, but these are absent in its Kirby's Dream Land 3 design. For the most part, Shotzo swivels around and aims at Kirby. Others stay locked-on at one place and shoot when Kirby comes near or shoot at a timed volley of three cannonballs in one direction.

Some Shotzos even have an attached parasol that they use to drift down from the sky. Once the Shotzo lands, the parasol will detach, and sometimes chase Kirby. 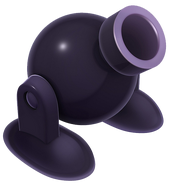 Retrieved from "https://fantendo.fandom.com/wiki/Shotzo?oldid=3203914"
Community content is available under CC-BY-SA unless otherwise noted.