Shine Sprites are items that appears in the Super Mario series. They made their debut in Super Mario Sunshine as Isle Delfino's main energy source, as well as the game's equivalent of Power Stars. Without the Shine Sprites, Isle Delfino would be left powerless and shrouded in darkness.

Shine Sprites also appear in some Mario Kart games. They are the primary focus of the Shine Thief minigame in Mario Kart: Double Dash!! and Mario Kart 8 Deluxe, where you must hold onto a Shine Sprite for as long as possible. Whoever is holding it when the game ends wins.

Shine Sprites appear in Super Mario Finale as rare collectibles. They only appear in Hanging Pianta Village and must be collected and brought to Piantimo III in order for him to allow Mario access to the nearby Sentinel Orb. Once they are collected and brought to him, they never reappear again, and their icon is removed from the menu. There are 6 total Shine Sprites in the Hanging Pianta Village.

Shine Sprites appear in Super Mario 64 Deluxe and it's replacing the Power Stars in the game, as the Power Stars are now used for invincibility. Mario, Luigi, Toad, Toadette, Yoshi, Wario, Waluigi, Rosalina, Pianta, Noki and the Mii-Character has to collect them to save Princess Peach. 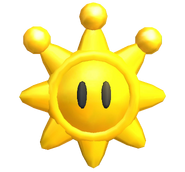 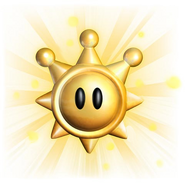 Add a photo to this gallery
Retrieved from "https://fantendo.fandom.com/wiki/Shine_Sprite?oldid=2958321"
Community content is available under CC-BY-SA unless otherwise noted.