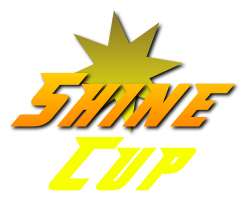 Shine Cup is the most unique cup, and the only downloadable one in Mario Kart Dimensions. It is unlocked by connecting with Mario Kart Rush, then beating two Time Trial races: one as Pianta, the other as Noki. There are two nitro and two retro courses, all based on the sunshiney tropical area Isle Delfino.

Gelato Speedway is the first course in the Shine Cup. The track takes place at a winter-filled Gelato Beach, with snow and the sand bird flying ahead. The course is similar to that of 3DS Rosalina's Ice World in this manor. The racers start on a giant, tilting mirror platform and will then drive onto the beach. On the beach, many Piantas and Nokis appear (with winter clothes on) and the racers must make quick turns and avoid crashing through the giant Watermelons or being hit by Cataquacks. The racers then drive into the icy water where a few Penguins swim (but can't hurt you, they act link walls) and Cheep-Cheep lurk. After making a few jumps in the water, the racers go up a spiral ramp onto the icy rink, then take a canon up to the platform.

The track remains the same as it was in Mario Kart: Double Dash!!, the only difference is that the useless pipe wall is gone and three Goombas walk around there instead. Racers are also able to drive underwater through the Cataquack area, where there are some Clams with coins and a few Cheep Cheeps. There is also a large Wiggler that runs up-and-down the path (which has been enlarged) that goes uphill towards the finish line.

The track remains the same as it was during the First Competition of August 2010 in Mario Kart Wii (with more crates, some Goombas and a few dead-end routes), the only difference is that there is now Graffiti everywhere, and a brown Polluted Piranha Plant is where the Grand Pianta Statue is, and will occasionally swoop down to attack. Swoopin' Stus also appear around this area. The Mud-filled ally is now filled with goop and some Swoopin' Stus.

Corona Caverns is the final course in the Shine Cup. The track takes place inside of the hot Corona Mountain, where players do various jumps and curves inside of the lava-filled volcano. Players start at the top of the volcano and take a huge jump into the pit. Where they land on a metallic grate platform. The racers drive down a spiral where they then make many more jumps over lava rivers and then avoid an area where lava geysers are. Racers then make many sharp turns, and make a large curve avoiding a lava pit where Podoboos jump out of. They then make another few jumps over lava rivers, and then land in a cannon where they get shot back up to the top (albeit on the other side of the volcano), where they drive down the side, avoiding many boulders coming to crush them, and then land in a small pond, where they turn, and go underwater back into the volcano. They come out of the underwater part and have to avoid steam geysers and a few Bullies roam around. The racers then go on a narrow rocky-path that is suspended in lava and must avoid even more podoboos. Then, some Lil' Cinders come out of a big hole in the ground. The racers make one large jump where a Chain Chomp is located and land smack dab inside of a cave where the finish line is located.