Fantendo - Game Ideas & More
Register
Don't have an account?
Sign In
Advertisement
in: The Threat Arc, Free to use Characters, Characters,
and 13 more

Shiki is very mysterious and nobody, not even The Enemy seems to know much about her. She is apathetic to most forms of life but especially despises the Catonea species. While not emotionless, she rarely feels anything that isn't her being comedically ornery towards others. Her likes and dislikes are kept almost entirely secret, although it is known she likes The Enemy as a friend but feels no romantic feelings towards him.

Despite her personality being seen as rude, Shiki isn't cruel. She is very observant and has a good side to her that's shown every once in a while. She is often seen laughing when attacking, getting some kind of perverse glee out of it. Shiki is a casual weed smoker, having taken up the habit after becoming free from The Enemy's responsibilities on her. She hangs out with people like Rei Carnation and occasionally takes hard drugs with them, although she has no ill or addictive effects on them due to her alien biology.

Shiki is the replacement for the The Apprentice, although she doesn't seem to have been created by The Enemy or The Fan. Much of her remains a mystery, but she has been serving The Enemy for the past two years.

Shiki has pale skin and pink hair that covers her left side of her face and has two strands sticking up, with the back of her hair done up in a flared bun. She has no visible eyes, either covered up by her hair or the shadows her hair creates. She wears a maid outfit that exposes her stomach and belly and has detached sleeves.

Despite her human-like appearance, she can contort her body in inhuman ways, such as bending her spine to the point where she can fit her head past her legs or spinning her neck like an owl's. She also has a unusually long tongue and pointed ears and can stretch her tongue to become a whip.

Shiki was introduced as a playable character in Fantendo Smash Bros. Victory on 8/29/16. She is introduced as a contrast to Sam, albeit with a completely different moveset. She plays a major role in the plot, although not quite as substantial as some other characters.

Shiki Shidare appears in Marvel vs. Fantendo: Battleworlds as a playable character. This is the debut of her post-Victory look.

Shiki has access to a dark energy known as "Malefactor" that allows her to do many things, such as float and summon items. She seems to use dark magic a lot, combined with needles or a bowl of dough that she can use to summon doughy monsters. Shiki has earned the title of "Seamstress of the Universe" through her skills with a needle and when she is at her most powerful, she can "unspool" her opponents and absorb their "string" to heal herself. She can also take out her own soul and absorb attacks, however this is easily one of her most draining spells.

She also is able to contort her body in ways that shouldn't be feasible. She can also absorb energy to heal herself without needing to take her soul out of her body, but she needs a strong connection between the power source and her body as seen in one of her victory poses where she is using car cables hooked up to a car battery connected to her fingers to take the energy out of it. 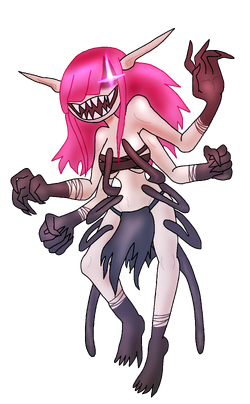 Feral Shiki Shidare is the name of a form that Shiki Shidare can take on when feeling starved or under particular danger. Taking on a more alien form, Shiki Shidare grows two extra arms and gains muscle mass. Her limbs take on dark colorations at the feet and arms. Her hair became unfurled and longer. Additionally, her mysterious "eye" appears as a shot of light that appears as a lens flare on every camera shot, obscuring it's true appearance. She grows eight tentacles across her back, which can stretch up ten feet and have no bones, allowing them to move very fluidly and sneakily. Her teeth become sharper and pink as well. She wears a loincloth and bandages as her outfit.

Feral Shiki's moveset changes entirely. She becomes rougher and more aggressive, taking on mobility as opposed to power. Her moveset also becomes physical, using her tentacles to wrap up her opponents and using her sharpened fingers and toes to slash into foes. She can easily move across ceilings and walls using her tentacles as almost bug-like legs, and her claws are capable of ripping even the roughest, coarsest skin.

Feral Shiki is defined by her desperate measure to active it, so the more feral she becomes, the more powerful she becomes but inversely, the less feral she is the less powerful she will become. She talks almost exclusively in grunts and harsh breaths, becoming even harder to communicate with and understand.