Sherms are enemies first introduced in Super Mario Odyssey. The Sherms are green, tank-like creatures that appear to be entirely mechanical. When captured and controlled in Super Mario Odyssey, they can be used to aim their cannons and fire shells. The Sherms can initially be found in the Wooded Kingdom, and are used in the Metro Kingdom to defeat the Mechawiggler plaguing New Donk City's inhabitants.

Sherms are tank-like, with a green, rusting metal body. On their sides they bare the emblem of Bowser; if it is true that they are entirely mechanical beings, they may be manufactured by the Koopa Troop. There is a cannon at the front of a Sherm, and the bottom area of their body sports a caterpillar track driven by 5 wheels each side. A row of spikes laces the middle of the body. Some Sherms wear a red and orange-striped top hat decorated with a white band marked with golden stars.

Like most other enemies, when a Sherm is captured by Mario they will gain Mario's blue eyes, moustache, and hat. 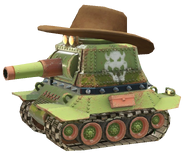