Shellcreepers are enemies in the Super Mario series, first appearing in the Mario Bros. arcade game. They are very similar to the more familiar Koopa Troopas, but they cannot be stomped; the player is required to flip them from below by jumping into the platform they are walking on, or use a POW Block to stun them.

A major game that Shellcreepers appear in is Kirby RPG and the Infinity Shard, where they are led by Waddle Doodle.

Shellcreepers return in Super Mario Realms. They start to appear in World 3, where they swarm the sewers with the help of Sidesteppers and Klaptraps. Unlike Koopa Troopas, which pop out of their shells and become Beach Koopas, Shellcreepers stay inside their shells when stomped. They wear Limegreen Shells, which when launched burrow straight through rows of Brick Blocks rather than bouncing off one at a time.

Shellcreepers as they appear on the Mario Bros. stage in Super Smash Bros. Brawl. 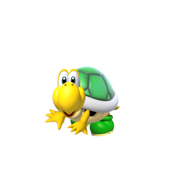 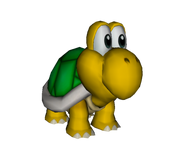