Sharps the Chicken is a character from the Sonic series. He appeared as the guitarist for the Sonic the Hedgehog Band and makes another appearance in ArchieSonic #201 as a member of Mina Mongoose's backing band, Forget Me Knots.

Sharps, alongside the entirety of the Forget Me Knots, returns in Sonic Heroes 2 as a member of Team Archaic. 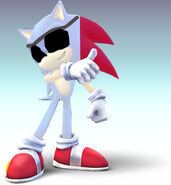 Brawl Look
Add a photo to this gallery

Retrieved from "https://fantendo.fandom.com/wiki/Sharps_the_Chicken?oldid=1960176"
Community content is available under CC-BY-SA unless otherwise noted.