Start a Wiki
Sharlamence is a Pokemon in Pokemon Fusion. He is a renowned bounty hunter who is known for his viciousness and wit. Being a hybrid of Sharpedo and Salamence, Sharlamence is a very dangerous opponent with razor sharp wings, giant teeth and four powerful claws.

Prior to the events of Pokemon Fusion, Sharlamence was a renowned bounty hunter, feared by many as the most deadly attacker on the planet. His greatest feat was taking down a mammoth Wailswine while others fled.

Initially, Sharlamence passes off as a gritty bounty hunter who inspires the player while they are an amateur, however as the player begins hunting on the same level as Sharlamence,he will become very determined to stop you from overtaking him, likely due to his superiority complex.

Rarely seen being content, Sharlamence strives to dominate the competition and remain at the top. He is relentless and power hungry and sometimes resorts to sabotage to get his way.

An aggressive fighter, Sharlamence possesses many dangerous moves that make him an adapt opponent. 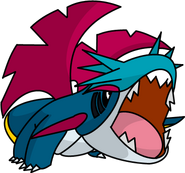 Sharlamence's regular appearance
Add a photo to this gallery
Retrieved from "https://fantendo.fandom.com/wiki/Sharlamence?oldid=2511628"
Community content is available under CC-BY-SA unless otherwise noted.