Shadow Mario (Japanese: ニセマリオ Fake Mario), also referred to simply as ?, is a major antagonist in Super Mario Sunshine. Shadow Mario is, as his name implies, a doppelgänger of Mario, as he is identical in form but appears to be made out of paint. He is commonly seen wielding a large brush known as the Magic Paintbrush, capable of creating graffiti and weaker enemies out of thin-air; this device was originally developed by Professor E. Gadd, though how Shadow Mario came to acquire it is unknown. In actuality, Shadow Mario is the disguise of Bowser Jr. The Koopa used this form throughout Super Mario Sunshine to ruin the reputation of the real Mario and allow him to easily kidnap Princess Peach (whom he was told by his father to be his "mama") and ruin the morale of the Toads that were vacationing alongside her.

As previously stated, and described by his name, Shadow Mario's appearance is heavily based on that of Mario's. Mario and Shadow Mario are essentially identical in terms of their form, though the latter is unique in that he appears to be made of some sort of light blue, translucent liquid - considering its prominent appearance within Super Mario Sunshine, this liquid is very likely paint. When angered, Shadow Mario's pupils gain small red lights atop them, which is the only part of his body not to be blue. Interestingly, the sleeves of Shadow Mario's shirt appear to be long, whereas Mario instead wears a short-sleeved short during his time on Isle Delfino.

Shadow Mario also possesses the ability to transform himself into a small blue orb capable of hovering slightly above the ground, allowing him to travel faster albeit unable to carry objects or interact with the environment in any particular way.

In order to transform into Shadow Mario, Bowser Jr. appears to require two prerequisites: in addition to wielding the Magic Paintbrush, Bowser Jr. seems to also need to wear a dark blue bandana over his mouth that is imprinted with a white sketch of Mario's nose and moustache.

Shadow Mario is one of the second-player characters in Goomsday Wii. There does not appear to be anyone wearing the disguise, as it can apparently now live on its own. Since he has no Magic Paintbrush, Shadow Mario instead uses the projectiles known as Shadow Balls. These turn their target good for five seconds before they self-destruct. This is especially useful if the enemy in question is acting as a road block. When an enemy infected by a Shadow Ball self-destructs, they will often drop any object which is not a specific part of them: for example, Scoombas may drop their snorkel, allowing Bowser Jr. or Shadow Mario to swim as fast as Waluigi.

In the game Super Mario World 3: A Galaxy Quest Shadow Mario appears as the boss of the Onefarious planet. During the intro cutscene Bowser Jr. appears and transforms into Shadow Mario to signal his alter-ego's return after Sunshine. Mario's doppelganger retains his same abilities from Super Mario Sunshine, though, due to the removal of FLUDD, is now weak to Superball Mario.

Shadow Mario appears as Bowser Jr.’s Hero Special Shot in Mario Tennis: Heroes Vs Villains. If Bowser Junior's Rival Bar is full then he may activate Shadow Mario Cage against Peach. A cutscene begins to play that shows Bowser Jr. turn into Shadow Mario. This confuses Peach allowing for enough time for Shadow Mario to drop a cage on her. Peach will remained trapped for a few seconds allowing for Bowser Jr. to attempt to get a point. If Peach uses her Hero Shot Cancel then the Cage will break immediately after the cutscene.

By selecting World 1-7 a cutscene will play. The cutscene shows Mario (with F.L.U.D.D. on his back) and Toad rushing into a large open lobby in Hotel Delfino. In front of them is Luigi hanging from a cage in the sky. Mario rushes towards him but is stopped when Shadow Mario jumps out from above in front of him. He begins to speak sounding almost exactly like Mario saying "If you want your brother you'll have to go through me first!" Mario gets his racket ready and F.L.U.D.D. says "It's on!" starting the match. The match works as a normal tennis match in the Casino Delfino court but with Luigi seen hanging from a cage in the background. If the match is lost the "You Lost" screen will appear. If the match is won a cutscene will play showing Shadow Mario grunt in anger. Shadow Mario then says "Fine you can take your brother, but I'm having this!" he then proceeds to take F.L.U.D.D. and carry him into the next room while F.L.U.D.D. is screaming "Help!" Mario and Toad help Luigi out of his cage and then Mario collapses on the ground tired. Toad then says "Luigi you think you can handle this without Mario for now!" Luigi then shakes his head worryingly. Toad then says "I knew i could count on you!" and pats him on the back. Luigi then stands up straight and rushes into the other room. A screen will then appear saying "Luigi has joined the team!" before returning you to the world map which now shows Luigi instead of Mario opening a path to World 1-8. You must then choose to go back to world 1-6 or continue on to World 1-8 Saving F.L.U.D.D.

Shadow Mario appears as a playable character in Jake's Super Smash Bros., marking his second playable appearance in a game after Mario Golf: Toadstool Tour. In this game he is depicted as being the alternate form of Bowser Jr. just as he was in Super Mario Sunshine; this is despite the fact that Bowser Jr. is another playable character in the game. Shadow Mario's moveset in the game revolves heavily around him using the Magic Paintbrush to create graffiti for use against his enemies. 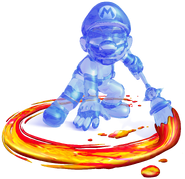 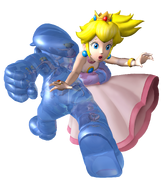 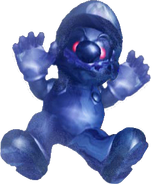 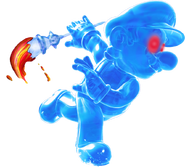 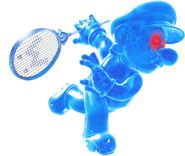 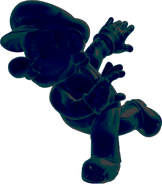 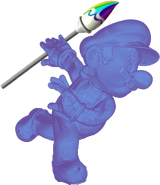 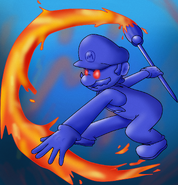 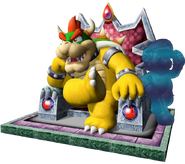 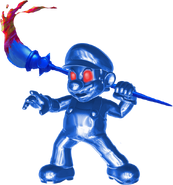 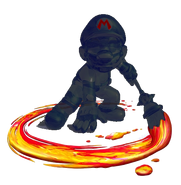 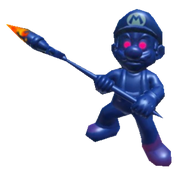 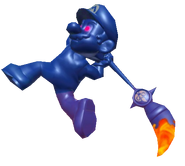 m&l shadow mario
Add a photo to this gallery
Retrieved from "https://fantendo.fandom.com/wiki/Shadow_Mario?oldid=3294717"
Community content is available under CC-BY-SA unless otherwise noted.