Start a Wiki
Shadem is the leader of the Bombx and the main villain in the Bombell series. Bombell wants to stop him from his evil plans of ruling the entire Mushroom World. After knowing that Bombell and his friends wants to defeat him, he also starts sending his Bombx to kill them. Shadem seems to be actually a massive Bob-omb rather than a Bombx. However, this is still unknown.

Shadem is a large purple Bomb ghost (maybe a Bob-omb). He wears a yellow crown with a red jewel on it. He has red eyes, white eyebrows and a evil smiling mouth. He also wears purple gloves and shoes, as well as a black eye patch with a skull symbol on it. Shadem bears resemblance to Big Bob-omb from the Mario series, they're not related at all though.

Shadem is a cruel and evil Bomb who only wants power and conquer. He's power-hungry and only cares about himself, he doesn't even care of his Bombx. His main purpose is to take control over the entire Mushroom World and turn it into his own world, and also, destroy those who want to stand on his plans. Sometimes he's also a bit awkward, and also not so smart when taking decisions.

Shadem makes his first appearance in Bomb Frenzy as the main villain. He's sending all of his minions to attack the whole Mushroom World and then take it over. Bombell and friends are now in a quest to defeat Shadem and stop his evil plans.

Shadem makes an appearance as a secret boss in Super Mario Smash Bros. You can fight him by unlocking all characters in the Bombell series via QR Code. After that, once you enter Story Mode, a cutscene will play showing Bombell coming across his lair. 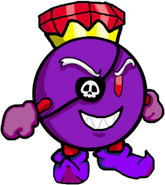 Bomb Frenzy
Add a photo to this gallery
Retrieved from "https://fantendo.fandom.com/wiki/Shadem?oldid=2029521"
Community content is available under CC-BY-SA unless otherwise noted.