Start a Wiki
Seth The Assassin or simply Seth is a character from Under Night In-Birth, he is one of Hyde Kido's rivals and an assassin hired by Bloody Chaos to kill him.

Seth is an extremely serious individual and never shows any emotion beyond stoicism. Although his cold attitude may come off as insensitive, he is greatly burdened by the mistakes of his ancestor and feels that if he fulfills Linne's wish for death, he can redeem his family name and free himself of the past. In Yuzuriha's story, her optimistic way of life despite her family's history briefly causes Seth to question his path and his individuality.

Seth is part of the DLC Pack 8 alongside Carmine, Frieza and Cell.

Seth is one of the Under Night In-Birth Minions.

He represents Under Night In-Birth along with the entire cast. 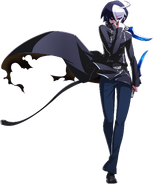 Add a photo to this gallery
Retrieved from "https://fantendo.fandom.com/wiki/Seth_The_Assassin?oldid=3160479"
Community content is available under CC-BY-SA unless otherwise noted.