It evolves from Servine starting at level 36. It is the final form of Snivy.

Serperior is a primarily pale green, serpentine Pokémon. Its face and throat are white, while its back is dark green. Curled, mint-colored patterns extend into the white portion of its face, and it has narrow red eyes. In the lower jaw, two fangs are visible when its mouth is open. There are two pointed yellow extensions on the back of its head. Coiled, dark green extensions spread out from the sides of its lower neck, forming a curving pattern lower down the body. It has curved yellow markings around its middle and several palmate leaves on its tail. Serperior will only attack with full force against opponents that are unfazed by its piercing glare. It is capable of amplifying solar energy with its body. 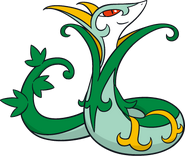 Dream World Artwork
Add a photo to this gallery
Retrieved from "https://fantendo.fandom.com/wiki/Serperior?oldid=3201655"
Community content is available under CC-BY-SA unless otherwise noted.