Serika Onoe (Japanese: 尾上 世莉架 Onoe Serika) is the main female protagonist of the 2014 visual novel Chaos;Child. Serika Onoe is the childhood friend of Takuru Miyashiro, though is one year younger than him. When the two enrolled at Hekiho Academy, they started up a newspaper club, which Takuru became the president of.

Though she appears to be a normal human girl, Serika is actually Takuru Miyashiro's childhood imaginary friend, whom he Real-Booted during the Tokyo Earthquake in 2009.

Serika Onoe has short pink hair with long spiked bangs that reach down to the mid-part of her forehead. Her hair is styled to be fairly spiked, with two of such spikes reaching down to her shoulders. She also has large pink eyes.

Like most characters in Chaos;Child, Serika is typically seen wearing the standard uniform for all girls who attend Hekiho Academy: a dark blue-black outfit with white accents and a pink bow that rests on her chest. Her casual wear consists of a white button-down dress shirt with grey plaid cuffs and a black tie.

Serika is shown to be a bubbly, and fairly air-headed, individual whenever at school; Takuru Miyashiro and the anime adaption of Chaos;Child suggest that Serika has always been this way, ever since her childhood. Serika is shown to be fairly friendly, and most of the Hekiho student body knows her, suggesting that she is fairly popular despite rarely spending time away from Miyashiro.

She is always willing to assist the newspaper club (more specifically, Miyashiro) in getting info on whatever story they are covering. Serika is the first member of the newspaper club to learn about the Revolving Dead murder, and convinces Miyashiro to break into the crime scene to learn more about what happened, suggesting a more mischievous side to her. Despite this, she is shown to get easily worried, being weary about going against the wishes of Miyashiro's foster-sister Nono Kurusu and easily getting scared when in creepy and dimly-lit areas, and will often play with an old Gero Froggy cell phone strap unconsciously when nervous.

In reality however, Serika only does whatever she must to keep Miyashiro entertained. To this end, she has demonstrated a cold and heartless personality. While Serika often speaks with a light tone, when serious she exhibits a more monotonous and calculating aura. In order to complete her own goals, Serika will ally herself with whomever she needs to to complete them, including those she dislikes such as members of the Committee of 300.

Upon being Real-Booted as a normal high school girl, Serika no longer exhibits these traits, yet her more bubbly personality is also toned-down slightly.

Serika Onoe appears in Jake's Super Smash Bros. as an Assist Trophy character. Serika attacks foes with her Di-Sword, primarily by slicing across the screen horizontally in a manner similar to how she does so in the opening of the Xbox One version of Chaos;Child. Serika represents the broader "Science Adventure" series, being the counterpart to the playable Akiho Senomiya from Robotics;Notes. 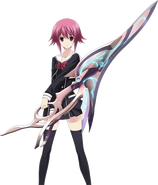 Serika in the true ending of Chaos;Child
Add a photo to this gallery
Retrieved from "https://fantendo.fandom.com/wiki/Serika_Onoe?oldid=2647449"
Community content is available under CC-BY-SA unless otherwise noted.