Sephiroth is the main antagonist of Final Fantasy VII, as well he is one of the most iconic villains in history of video games.

Sephiroth appears as a Boss Unit.

He has a major role in this game, his story in the game canonically takes place after the events of Final Fantasy VII and Advent Children.

He first appears in the Forgotten City (Castlevania: Portrait of Ruin) in Chapter 23, where he join forces with Jedah Dohma, Death and a reawakened Dracula, after being beaten by Cloud and Tifa, he is forced to escape.

In Chapter 28, Sephiroth is seen heading an army of demons from Makai which uses not only to anihilate Cloud once and for all but to also destroy everyone and the place alike, for his bad luck, his plan backfires and is once again forced to escape, but not before telling Cloud that next time they'll meet, he'll be up for a surprise.

Prior to the events of Chapter 36, Sephiroth unleashed the chaos around the world our heroes were passing through and set tons of enemies from his world and other worlds as obstacles for Cloud's group.

In Chapter 36, Sephiroth has taken Aerith's soul as a hostage, once Cloud managed to go near them, Sephiroth paralyzes him and gives everyone a chance to rescue him in 19 minutes or else he will suffer the same fate as Aerith.

Once Tifa rescues Cloud, Sephiroth sees how Cloud promises Aerith that he will keep the world safe for her and the latter vanishing peacefully back to the afterlife after bidding farewell to Cloud, immediately, the One-Winged Angel has a brief talk with Cloud before engaging on a fierce battle.

With his defeat, Sephiroth breaks in rage as he denies his defeat and flies far away to an unknown location.

In the Final Chapter, Sephiroth prepares himself for the final battle against Cloud's group and explains that the energy that emerges from Galamton will make him way more powerful and immortal. Finally, after being beaten, Cloud demads him to stay in his memories; during his last moments, he replies that such words gives him nostalgia from their battle in the ruins of Midgar, and marks as his final words "But like I said...I will... never be a memory!" before exploding.

Sephiroth appears as a playable character, he can be unlocked via registering his Amiibo.

Sephiroth is one of the veterans of the game.

He is one of the characters of the game.

Sephiroth appears as an unlockable character.

Sephiroth appears as a playable unlockable character in Super Smash Bros. Revolution. Sephiroth is one of the main characters of the story chapter Sci-Fi Infiltration where he takes more of a protagonist role. Safer Sephiroth, as well as being his Final Smash, also functions as a boss battle and is the final opponent in Sci-Fi Infiltration where he is fought by Master Chief, Samus, Snake, Cloud, 2B, Shadow, Mewtwo, Mega Man, Pikachu, Jill Valentine and Sephiroth himself.

As of December 23, 2020, Sephiroth has become playable in Super Smash Bros. for the arcade. He has eight palette swaps, and his two shirtless palettes have been replaced by his standard uniform in more different colors.

Sephiroth is expected to be a playable character in PlayStation All-Stars: Ultimate Battle. He has eight palette swaps.

Sephiroth, alongside Euron Greyjoy, is one of the two strongest members of the Crows of Liberation. Titles "Ebon Angel of Purity", he works alongside Euron to create the Singularity and defy the laws of time and causality, thus ascending to godhood. He controls Bowser through a fragment of Jenova, making him Jenova Pandemonium. In the end, Sephiroth and Euron fuse with each other to become Shiroyami Euron, with various powers from Sephiroth but completely controlled by Euron. From their interactions, it can be assumed Goro Akechi is trying to hit on Sephiroth to make up for the loss of a man named Siegfried he used to like.

He reappears as playable character. He appears in the chapter 22: Fight is NOT enough!, when he appears to kill Wagner and Londkreia.

He reappears as playable character in the sequel of Super Smash Bros Accelerant. 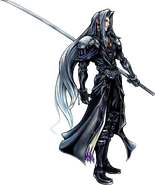 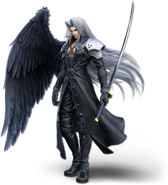 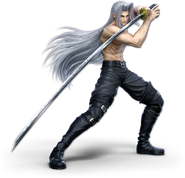