Start a Wiki
“Betolpy! This is madness! You must stop it... but if you won't, I will do it myself!”
— Scyplo, Robo Madness

You may be looking for the New Fantendoverse version of the character.

Scyplo is a new generation robot made in faraway planet, Alienta, by an alienoid species. He was designed to be first robot with emotions and hammerspace. He is also the star of Robo Madness series.

Scyplo was created in a lab of planet Alienta as a prototype to new generation robots, which had ability to have human emotions. Some time after his creation, cloning machine was used on him, creating Betolpy. However, it was still unknown if Scyplo could really have emotions, as Dr. Elfain and her scientists could make it in so little time, so he was took into a testing field to see if he could control emotions and if hammerspace worked. The hammerspace worked perfectly, but it was discovered that he could only have emotions in battles. After they returned to lab, Scyplo saw the lab completely destroyed, along with Betolpy's capsule. Scyplo's quest to catch Betolpy, had begun.

Scyplo is very intelligent, mostly because he has automatic access to all networks, and can get information in seconds. He is a reliable source of information about everything, and manages to solve hard problems easily. In addition, he may also think about things more than he should, even searching if someone has been in the same trouble as him to analyze their mode of solving it and correcting the errors for his own use.

He cannot control emotions easily, and they just come in and come out. He puts his duty and helping others before any other thing. 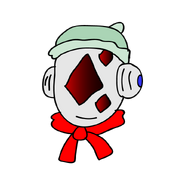 Fantendo Nightmare
Add a photo to this gallery

Retrieved from "https://fantendo.fandom.com/wiki/Scyplo?oldid=2938760"
Community content is available under CC-BY-SA unless otherwise noted.