Start a Wiki
Scumee is a enemy featured in FantendoQuest. They appear in Abandoned Tunnel.

Whenever adventurers mess up, some of them can undo their mistakes with the help of a magical device known as Soyletime. This of course, turns their last mistake into Scumees, as that time has to be converted into something... Scumees don't last long, and beg to be killed. 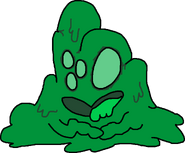 Retrieved from "https://fantendo.fandom.com/wiki/Scumee?oldid=2317412"
Community content is available under CC-BY-SA unless otherwise noted.