“These critters are annoying as all hell, They gang attack you like no other Drone does, and are very fast. Luckily for us rebels, they're about as tough as a ball of cotton wool, And they look the part.”
— Rebel Datalog, ???


Scouter Drones are common Raven Drones which appear in The Factor. They were designed to be a mass-producable and inexpesive drone to take down minor criminals or in the case of Post-Surge events, rebels. But because they are so cheap to create, they are the weakest drones in the game offensivley and defensivly due to cheaper armor and less ranged weapons, though Scouter Drones make up for this with it's immense speed. They appear as a item in many Fusion spin-offs, and are a item in Ella-Metals Racing.

Scouter Drones are small spherical drones which yeild 6 walker legs to move with more versatility. They have front cameras mounted inside the robot, which is seen when the drone retracts a protective plate covering it while it waits for a threat.

Scouter Drones primarily gang-attack the player at close range, they commonly dodge blasts which are aimed at them by strafing sideways. As the player damages a Scouter Drone, the drone's attacks increase in speed, which makes the drone more difficult to destroy with a regular gun.

A full gallery of all artwork of Scouter Drones. 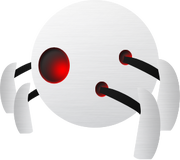 In game model of a Scouter Drone.
(by Spark01 (t∣b∣c)).
Add a photo to this gallery
Retrieved from "https://fantendo.fandom.com/wiki/Scouter_Drone?oldid=496710"
Community content is available under CC-BY-SA unless otherwise noted.